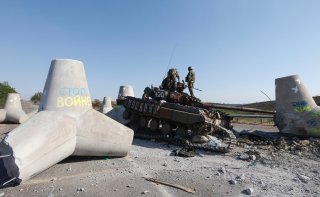 Russian forces are stalled around the outskirts of Kyiv, food and supply shortages continue to plague advancing Russian forces, and Ukrainian resistance is, by all reports, holding very firm.

It would make sense if this were the case, given the apparent success of their operations thus far. Pentagon officials, independent observers, and countless news reports have spoken at great length about the resolve, intensity, and continued success of the Ukrainian fighters. There are likely many reasons for this, perhaps the first and foremost simply being intensity and will to fight, as Ukrainians are fighting for their homeland and existence. This is particularly true given that the Russian military is now targeting civilians as part of what appears to be a terror campaign to scare and traumatize the Ukrainian people into submission. However, it does not seem to be working. The sheer intensity and determination of the Ukrainians to defend their homeland with their lives is captivating global attention.

Knowing the terrain and building structures likely helps the Ukrainian forces, as well-armed Ukrainian fighters are showing the world how a dismounted force of decentralized soldiers can take on a heavier mechanized invading force. Tactics are fundamental to this, as fighters can use the cover of buildings to avoid detection before surprise attacks on advancing armored and tactical vehicles. To accomplish this, Ukrainian fighters are likely operating without a heavily centralized command and control, allowing them to push certain kinds of decisions past approval chains. This would enhance efficiency by enabling forward operating units to employ ambush and hit and run tactics successfully. Also, dispersed groups of fighters appear to be having success attacking Russian forces at critical intersections and chokepoints, where advancing forces may be more vulnerable.

“We're definitely seeing anecdotal evidence, anyway, that the -- that the Ukrainians are not only defending well, where they choose to defend, but they are -- they are making efforts to take back territory that the Russians have -- you know, have taken in recent days,” the senior defense official said.