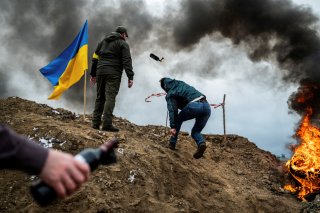 Russian armored vehicles are being destroyed by determined Ukrainian fighters, the much-discussed Russian convoy has been bogged down with logistical problems, and many question the fundamental ability of the Russian military to conduct a combined arms maneuver operation. In addition to all of these factors, is it possible that Russian soldiers just don’t want to fight? Do Russian soldiers have the will to occupy Ukraine and kill its people, many of whom share a common history with them? While will to fight is difficult to quantify, it is a highly impactful variable that can influence and even determine the outcome of a war.

Although Russian troops may fear the consequences of speaking out, many of them are likely questioning Putin’s war effort. It is possible that their humanity may eventually prevent Russian soldiers from targeting civilians. Despite the pressures of war, humans may have an innate sensibility for compassion. This apparent lack of resolve on the part of the invading Russian forces may be why the Russian military has resorted to massive, long-range attacks on civilian neighborhoods.

Are they being threatened and forced into fighting? Anecdotal reports have suggested this possibility, and there is also the chance that some Russian forces simply do not want to kill Ukrainians. Famous French Philosopher Jean Jaques Rousseau spoke at great length about what he called “natural pity,” a human characteristic that comes from a deeply innate altruistic tendency.

Could this sentiment be emerging within some Russian soldiers who are now aware that their actions are killing children? While that is certainly the hope of many, there are definitely zealots and true believers among the ranks of the Russian military as well. This support for the invasion may be heavily influenced by a large-scale propaganda effort within Russia to distort the truth about events in Ukraine and marshall support for the invasion among the public. Multiple media reports have explained how the “Z” symbol is a sign of support for the Russian invasion. The free flow of information within Russia has continued to be massively curtailed as the country’s government seeks to present a distorted picture of what is happening in Ukraine. This is part of why there is such a large-scale effort among many to get volumes of accurate information about Ukraine into Russia.