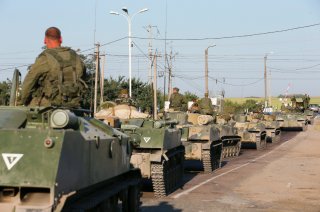 Kiev’s defenders are bracing for a showdown with the forty-mile-long Russian convoy looming on the outskirts of Ukraine’s capital city.

The convoy sitting roughly fifteen miles outside Kiev has reportedly not moved for days. U.S. officials say the stall is partly due to logistical failures, including food and fuel shortages. Other experts have pointed to command and control problems ranging from faulty radio equipment to compromised communications networks. Though they lack the capability to destroy or seriously degrade it, Ukrainian forces have launched several strikes on the convoy from the front and back. According to U.S. officials, Ukrainian forces successfully slowed Russia’s advance toward Kiev by destroying a bridge in the convoy’s path.

The convoy was previously widely believed to consist of main battle tanks, towed artillery, and other armored vehicles, but more recent assessments by Western governments contend that the force is likely made up of supply vehicles. “Our assessment is that it’s largely meant for resupply, but I can’t rule out that there aren’t combat vehicles,” Pentagon spokesman John Kirby said on Monday. Kirby added that the force in question could actually be several convoys all bound for the same location.

Glen Grant, a senior defense expert at the Baltic Security Foundation, told Newsweek that a coming cold snap in the Kiev region could work in Ukraine’s favor. "A metal tank is just a fridge at night if you are not running the engine," Grant said. "The cold weather is going to demoralize troops even further and will create even more refrigerators.” Grant predicted that the extreme weather conditions will lead many Russian soldiers to surrender. "You just can't sit around and wait because if you are in the vehicle you are waiting to be killed. They are not stupid." British and U.S. intelligence sources have assessed that the invading forces are now working behind the scenes to correct the logistical shortcomings that plagued the Russian military campaign in its initial stages.

Though the Russians likely have air superiority in the area surrounding the convoy, military expert Michael Kofman told the Washington Post that the Ukrainian military can still damage the convoy through drone strikes. The Ukrainian military has reported widespread success in employing Turkish-made Bayraktar TB2 drones against Russian military assets throughout the country, although these claims have largely not been independently corroborated. It is unclear how many Bayraktar drones Ukraine has procured, and it has not been confirmed how many are still flying twelve days into the conflict.

Russia’s delays on the ground have been accompanied by an intensification in the bombing campaign against major Ukrainian population centers.