Ukraine Mounts Counteroffensives as Russia Stalls Outside of Kiev 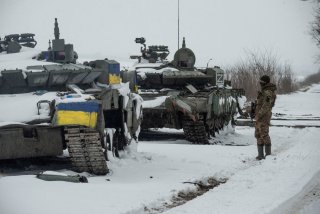 Twenty-seven days into the war in Ukraine, the invading Russian forces are digging in for a protracted conflict as the Ukrainian military reportedly mounts counteroffensives in the north and south.

Ukrainian officials said on Tuesday that their troops regained control over the suburb of Makariv, located some thirty miles to the west of Kiev. The claim has not been independently verified. Makariv has reportedly changed hands several times since the war began on February 24; Ukrainian forces previously announced that they had liberated the town on March 2, but local Russian forces recaptured it shortly thereafter.

This latest development, if confirmed, would prevent Russian forces from encircling Ukraine’s capital city from the northwest. If the Ukrainians are able to expand these gains, they could potentially threaten other Russian positions around the city.

The Ukrainian Defense Ministry has reportedly acknowledged that Russian troops still control the Kiev suburbs of Bucha, Hostomel, and Irpin. Russian forces seized the nearby Hostomel Airport in the campaign’s opening days, though it is unclear if they have managed to maintain control over the strategic airport. CNN reported on Monday that the apparent flooding of the Irpin River, as well as the destruction of a key railway bridge in the Irpin region, could further stymie the Russian military’s attempts to position themselves for an all-out assault on the capital city. Kiev continues to be hit by constant Russian airstrikes and shelling, with one such attack destroying a large shopping mall on Monday, but there is currently no indication that local Russian troops have immediate plans to storm the city.

There is widespread consensus among Western governments that the invading Russian forces have been bogged down near Kiev as they attempt to eventually seize the capital, which reportedly remains the Kremlin’s top wartime objective.

The Ukrainian military announced late last week that it has begun an offensive from the southern port city of Mykolaiv in the direction of Russian-occupied Kherson, but the status of those reported efforts remains unclear. Russian forces are conducting a new round of bombardments and long-range missile strikes against the southeastern coastal hub of Mariupol, partly with the help of surface combatant ships in the Azov Sea. The fierce fighting in Mariupol follows on the heels of a Russian ultimatum, promptly rejected by Kiev, for the city’s defenders to surrender by 5 AM on Monday. The capture of Mariupol, one of the last major Ukrainian-held cities in the southeast, would mark a significant milestone in Russia’s efforts to consolidate control over the eastern Donbass region and seal the Ukrainian military off from territories east of the Dnieper River.