Kyiv’s Trilemma: Possible Settlements to the War in Ukraine 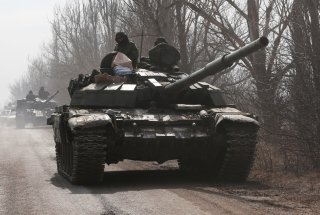 As Russia’s brutal invasion grinds slowly across Ukraine, leveling cities, destroying innocent lives, and leaving ghastly carnage in its wake, talk has already turned to providing “off-ramps” for Russian president Vladimir Putin to allow him and his army to exit Ukraine while saving face. Such wishful thinking is understandable, given the Ukrainian people’s fierce resolve and their military’s unexpected combat effectiveness against Russia. But such talk is premature—this war is far from over.

Despite low morale and poor performance among his conscript soldiers, logistical nightmares, and laughably decrepit equipment, Putin isn’t ready to settle despite his foreign minister’s recent claim that there was “hope for reaching a compromise.” This is just more Russian misdirection—Putin is not even remotely interested in finding an off-ramp yet.

An important strand of international relations theory tells us why. The “bargaining model of war” views warfare as just another form of negotiation, where two sides engage in multiple (if bloody) rounds of “bargaining” until they converge on a common set of expectations about the outcome of the war.

One of the problems preventing a settlement in Ukraine is that both Russia and Ukraine are pursuing indivisible war aims: Russia seeks the extermination of Ukraine’s sovereign democratic government, while Ukraine seeks to continue its existence as a country. Given that these two maximalist goals are mutually exclusive in the minds of each country’s leaders, it will take a lot of fighting to settle the conflict or even generate a stalemate.

The other reason the conflict is likely to drag on is that each side thinks that it still has a chance of winning the war. If this were not true, the “inevitable” loser would recognize that fate and hope for the best terms of surrender. As of today, Putin and Ukrainian president Volodymyr Zelenskyy both believe that they can win this war. The reason they believe this is because they still have incomplete information about the other side’s capabilities and resolve. But each combat engagement between Russian and Ukrainian forces reveals new information about how well each country fights and how likely they are to prevail. Sooner or later, this bloody “bargaining” will reveal enough information that the loser acknowledges the inevitable and sues for peace.

Ukraine, led by their brave and charismatic president, shows no signs of throwing in the towel—this is an existential fight for survival. But nothing that Vladimir Putin has said or done since the start of this war suggests that he is ready to abandon his original war aims and pursue a diplomatic off-ramp. In his mind, Russia will ultimately prevail if it simply continues to grind Ukraine to dust, no matter how long it takes.

Even though it is premature to hope for diplomatic off-ramps and face-saving measures, it is still useful to consider the possible long-term outcomes so that a future settlement—however distant—can be steered toward more favorable terms for Ukrainian, American, and European interests. In a perfect world, Ukraine would emerge from this tragic episode “whole, free, and at peace,” to paraphrase President George H.W. Bush’s vision for Europe in 1989. Sadly, short of the implosion of Putin’s regime, this utopic vision is a near impossibility without a vigorous and sustained Western effort.

Instead, Ukraine will likely be forced to come to terms with reality: at best, they can achieve two out of the three goals in the Bush troika. At worst, Russia will deny Ukraine all three, leaving the country divided, subjugated, and at war. Tragically, this “zero outcome” appears the most likely for the foreseeable future without increased Western support of Ukraine.

This is what I refer to as Ukraine’s “trilemma,” a situation where Kyiv cannot achieve all three elements of the troika and will have limited ability to shape which of the remaining outcomes it can obtain. The following assesses the plausible combinations and likelihood of each emerging as a new status quo.

A Ukraine free, whole, and at war. Likelihood: medium-low.

Paradoxically, this is the scenario that Ukraine will face if Russia agrees to a ceasefire and fully withdraws its forces. Ukraine would be free from Russian occupation and would regain its territorial control of the country, but it would not be at peace. This is because Russia will continue to wage its hybrid war against Ukraine as long as there is an independent, democratically elected government in Kyiv. Replacing Zelenskyy’s government with a Russian puppet regime has been Putin’s objective all along, one that he will never give up. Though the shooting and air strikes may end, the Kremlin will continue to wage cyber, information, political, and economic warfare against Kyiv regardless of whatever ceasefire agreement Moscow might sign.

A Ukraine whole and at peace, but not free. Likelihood: low.

This is what Putin thought he could easily achieve when he launched his invasion: a rapid blitzkrieg sweep toward Kyiv, quickly encircling the city and forcing Zelenskyy out of power. The installation of a pro-Russian puppet government would cement the subjugation of Ukraine. Meanwhile, the Ukrainian people would passively accept their new reality and get on with their lives, necessitating only a minimal Russian military presence after the hostilities ended. Obviously, Putin grossly miscalculated—his forces are bogged down, and it is now clear that there will be an insurgency in Ukraine as long as the Russian invaders remain. In the long run, this is an unlikely outcome.

A Ukraine free and at peace, but not whole. Likelihood: low.

This is the “Korean War scenario.” A military stalemate produces a ceasefire that ends active combat but results in a long-term partition of the country along a stable but highly militarized boundary. A free and democratic rump Ukraine survives with its capital in the western Ukrainian city of Lviv, while Russia establishes and supports a buffer state in eastern and southern Ukraine, or whatever territory it held at the time of ceasefire. However, the inevitability of an ongoing insurgency in the Russian puppet state casts doubt on whether this scenario would truly be peaceful, making it another low-probability outcome.

A Ukraine whole, subjugated, and at war. Likelihood: medium.

This scenario looks like Russia’s second war in Chechnya from 1999 to 2009. Russia achieves total territorial control and political subjugation of Ukraine at an enormous cost: countless innocent lives are destroyed, both militaries suffer staggering losses, and Ukraine’s historic cities are leveled. But Ukrainians continue to resist, sapping Moscow of blood and treasure. It is worth remembering that it took Putin ten years of total war to crush the Chechen resistance. But Chechnya is a fraction of the size of Ukraine, while Kyiv has powerful Western partners providing it with aid.

A Ukraine free, divided, and at war. Likelihood: medium-high.

This scenario is basically what Ukraine experienced from 2014 to 2022 as Russia occupied Crimea and supported the Donbass separatists. However, this scenario would likely feature an expanded area of Russian control and an official Russian military presence. A democratic rump Ukraine would survive in the western half of the country, but instead of a ceasefire, active fighting continues across relatively stable battle lines. This is the not-so-frozen conflict scenario, one that Putin would use to his advantage to continue his ongoing efforts to destabilize and overthrow the democratic Ukrainian government, even if his army’s advance across Ukraine falters.

A Ukraine divided, subjugated, and at peace. Likelihood: low.

This scenario is included for completeness but is highly unlikely, bordering on illogical. Yet such a scenario—however unlikely—might look like France during WWII, when the subservient Vichy regime existed as a de jure independent state alongside the Nazi-administered military occupation zone. Both administrations were under de facto German control even though France was effectively partitioned. It’s hard to imagine such a scenario in Ukraine, especially because of the likelihood of an ongoing insurgency that would render the idea of a peaceful partition moot.

Tragically, the most likely outcome for Ukraine in the short to medium term is the most depressing: Ukraine is denied all three pillars of the European ideal. Ukraine is neither whole, free, nor at peace in this “zero outcome.” There will be a patchwork of Russian occupation zones with fluid lines of combat and each side will fight for localized gains and losses. There will be fierce partisan resistance in areas under Russian occupation, a prospect sure to raise the cost of Moscow’s severe miscalculation but unlikely to force Putin to quickly reverse his catastrophic mistake. Although Ukraine would attempt to maintain stable democratic governance in the areas under its direct control, it would not be a truly “free” Ukraine as long as significant portions of the country were controlled by Putin’s exported dictatorship.

It is too soon to say which of the above scenarios will come to pass. Although Putin shows no signs of relenting or pursuing diplomatic “off-ramps” for the brutal humanitarian disaster he has unleashed, this does not mean that the United States and its allies are powerless to shape the conflict’s trajectory. The best way to increase the odds of Ukraine taking its rightful place in Europe as a nation “free, whole, and at peace” is to impose the maximum costs possible on Russia for as long as it wages its unjust war.