The Kremlin Cannot Continue to Ignore the Chaos in Chechnya 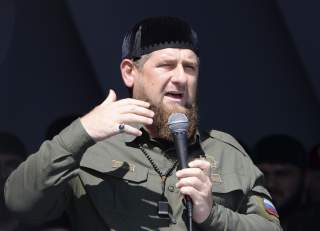 Ramzan Kadyrov has long been a headline staple beyond the bounds of the republic he rules, Chechnya. His penchant for tracksuit meetings at the Kremlin and workout videos have made him a regular media phenomenon throughout Russia and the North Caucasus, while less savory proclamations about letting the families of gay men “deal with them” have made rounds in the West.

For others in the North Caucasus, Kadyrov was largely seen as an unappealing curiosity—someone who repressed his people to a degree they could hardly imagine in their own republics, but largely “Chechnya’s problem.” Moscow’s view was similar: as long as he kept the lid on Chechnya and maintained “stability,” the oh-so-familiar sacrosanct principle of Vladimir Putin’s tenure, then whatever horrors he inflicted on his captive populace were of little concern.

But Kadyrov is a man of no small ambition. In the last two months, exercising this ambition has led the rest of the North Caucasus, particularly his present target, Ingushetia, to realize the depth of the problem he poses. It should also deeply trouble Moscow, as Kadyrov’s present actions are not an isolated incident, but part of a pattern of behavior that gives every indication he intends to go yet further.

The Man Who Would Be King

Ramzan Kadyrov was never meant to be a ruler at all. That honor initially went to his father, Akhmat, in honor of whom nearly everything in the Chechen Republic has since been renamed. After Akhmat’s assassination in 2004 and Ramzan’s de facto ascent to leader, his power was supposed to have been checked by other pro-government clans and their militias in the region. He saw to that as well, securing absolute control as he destroyed his main rivals, the Yamadayev family, and drove them into exile, culminating with the murder of Sulim Yamadayev in a Dubai hotel in 2009.

For the next few years, Ramzan contented himself with annihilating the remainder of the Chechen insurgency while glamorizing his rebuilt capital. Grozny became replete with skyscrapers and monumental architecture, transforming into a bizarre Potemkin village, a Dubai on the Sunzha. The rebels were gradually degraded, losing the ability to contest Kadyrov’s troops by 2014. The welfare of the average citizen remained largely unchanged: unemployment was estimated at 75 percent in 2009, while collective punishment and summary executions by security forces were widespread.

And it wasn’t just the physical landscape that changed. Kadyrov did his best to alter Chechen society to better fit his particular, Islamic vision. Chechen women have never traditionally worn the veil, but under a harassment campaign by security forces, they adopted it. Neither have Chechen men taken multiple wives, something Kadyrov recently instructed Chechen police to do (and practices himself). This dovetailed with his moves to place Chechnya at the center of Russia’s interactions with the Muslim world, a shift that now sees Kadyrov making regular visits to the Arab Gulf states (and vice versa) and with Chechen troops across Syria. The padishah, to use the imperial title supporters informally conferred upon him, had become Moscow’s de facto envoy to the Middle East.

An Emperor Without an Empire

Those who never hear “no” rarely know when to stop. So in Ramzan’s mind, there was no reason his writ should cease being law at Chechnya’s borders.

His security forces have long acted abroad, carrying out executions of opponents in Austria, Ukraine, Turkey, and the United Arab Emirates. Chechen siloviki have abducted dissidents elsewhere on Russian territory, and are suspected of killing politician Boris Nemtsov on Red Square in 2015. Closer to home, they had carried out raids as well, with cross-border operations into Ingushetia and Dagestan showing Kadyrov’s contempt for provincial boundaries.

This September, Ramzan decided to go yet further. His forces appeared in Ingushetia, declaring that they were standing on Chechen land as heavily armed militiamen guarded construction crews. A new road was under construction through this now-deserted border territory; one Chechen friend told me work on it began in April.

On September 26, news emerged that Kadyrov and the head of Ingushetia, Yunus-Bek Yevkurov, had abruptly signed a document transferring up to 10 percent of Ingushetia’s territory to Chechnya. It was an incident seemingly unthinkable in any other country (or indeed, any other part of Russia): one province forcefully annexing part of its neighbour. But all was not to be as simple as Ramzan had hoped.

The Limits of Akhmat’s Strength

Ingushetia and Chechnya may share a common culture, language, and history, but the former today has something almost eradicated in the latter: a vibrant civil society. Ingush activists promptly exploded into action, launching two weeks of street protests against the new dismemberment of their republic. All segments of society turned out to the demonstrations, with numbers reaching as high as sixty thousand (from a total population of less than half a million). New media outlets, civil forums, and international organizations were formed, with all major Ingush clans expressing their opposition to the land transfer. Even Ingush security forces joined with protesters, preventing police from other regions from entering the protest grounds.

Completely unused to any opposition to his moves, Ramzan responded forcefully, telling Yevkurov that he was amazed with his patience with “such people who spread lies.” He told protesters on October 8 that if they wanted a fight, then he was happy “to go to war.” In an address to the Chechen Parliament on October 18, he stated that the law had already gone into force, and that any Ingush who had a problem with the deal should “come to my territory. Try and have just one protest. We will see if you leave alive.”

Such threats were not taken kindly in Ingushetia. Mockery of Kadyrov became a regular theme among demonstrators: not in official slogans, but overheard everywhere in cafes and on the street. Some expressed disbelief, as with one Ingush friend who said to me, “I simply can’t believe that someone who lived through these two wars would want another one.” Others responded with anger: one young Salafist man I spoke with insisted that “if they [the protesters] really want to get something done, they should take weapons and go to our land and face these people.” But for most, the main theme was dismissal and a redoubled resolve to continue their attempts. “You could say that here, Akhmat is not strength,” one Ingush protester told me with a grin, referencing Kadyrov’s catch phrase “Akhmat Sila” (Akhmat is strength).

Incensed by such opposition, Kadyrov decided to begin addressing the problem directly. On October 19, he and his motorcade made a nighttime visit to the Ingush village of Surkhakhi, demanding an apology from Muhazhir Nalgiev, an elder who had disparaged him as a “shepherd.” Six days later, he dispatched Chechen parliament speaker Magomed Daudov, one of his main enforces, to Novyi Redant, Ingushetia to attempt to bring another Ingush elder to sharia court (not legal under Russian law) in Grozny. The following day, October 26, Kadyrov himself came again to Ingushetia to talk to another dissident elder. Each time he and his entourage were met by hundreds of young Ingush men who gathered from neighboring villages to show their support and prevent the Chechen side from detaining their interrogation targets. None of the tense standoffs escalated, but incensed reactions on Ingush social media suggest this may have been a matter of luck.

The present situation between Chechnya and Ingushetia is dangerous. Continued protests in the latter and hints by Kadyrov that he will continue aggravation in the border area suggest that the situation will not resolve itself peacefully on its present course. Three actions should be taken to calm the present.

Firstly, Kadyrov cannot continue his nocturnal interrogations in Ingushetia. These have already brought tensions between both sides to new heights and could easily result in an emotional miscalculation on one side that results in violence. Whether of his own volition, however unlikely, or by federal involvement, these visits must come to a stop.

Secondly, a resolution with Ingush civil society must be reached. A referendum or consultation with civil society over the terms of the land exchange would greatly alleviate tensions and feelings of popular disenfranchisement. This could be much more easily accomplished if the Kremlin were to step in: Yevkurov has been revealed in the eyes of the Ingush to be powerless in the face of Kadyrov, and he has lost popular legitimacy. If Moscow insists on allowing the land transfer to Chechnya, then a serious federal initiative to resolve the long-running Prigorodnyi dispute between Ingushetia and its western neighbour North Ossetia, which has made the present exchange so much more painful, would go a long way towards placating the understandably aggrieved people of Ingushetia.

Finally, and most importantly: Ramzan must be put in his place. He is a regional governor of one of Russia’s eighty-five federal subjects, not the viceroy of the entire North Caucasus, and, despite what he may believe, certainly not the leader of an independent Islamic state. He is largely answerable only to Putin himself, which leaves the task of bringing him under control to the Russian president. His aggressive and provocative behavior has only grown more dangerous as time has gone on, not less. If Kadyrov is left alone, a return of large-scale violence and possibly open warfare in the North Caucasus, and Chechnya itself, seems almost inevitable.