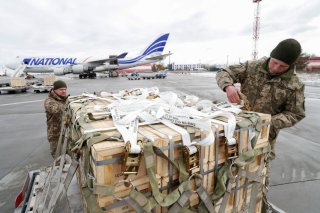 In a statement on February 26, Secretary of State Antony Blinken announced that the United States is preparing to send additional aid to Ukraine, including both weapons and money. However, this latest tranche is not the first amount of aid to reach Ukraine from the United States.

“Last fall, as the present threat against Ukraine from Russia developed, under authority delegated by the President, I authorized the Department of Defense to provide $60 million in immediate military assistance to Ukraine. In December, as that threat materialized, I authorized a further drawdown worth $200 million,” Blinken’s statement said.

“Today, as Ukraine fights with courage and pride against Russia’s brutal and unprovoked assault, I have authorized, pursuant to a delegation by the President, an unprecedented third Presidential Drawdown of up to $350 million for immediate support to Ukraine’s defense. This brings the total security assistance the United States has committed to Ukraine over the past year to more than $1 billion.”

Though details on what the aid package will specifically include are not known, what the package is designed to counter provides clues.

“This package will include further lethal defensive assistance to help Ukraine address the armored, airborne, and other threats it is now facing. It is another clear signal that the United States stands with the people of Ukraine as they defend their sovereign, courageous, and proud nation.”

Considering the significant threat that Russian armored vehicles and aircraft pose to Ukrainian defenders, it could be assumed that the United States would send additional anti-tank and anti-aircraft missiles. This would augment the Javelin anti-tank missiles that the United States has already supplied to Ukraine and could also include Stinger anti-aircraft missiles.

Although previous Stinger missiles delivered to Ukraine appear to be mounted rather than man-portable, providing a more mobile variant would be a significant boon to Ukrainian forces.