This Stinger Missile Is Back 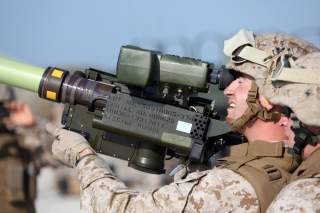 The FIM-92 Stinger surface-to-air missile has been a staple of America’s short-range air defense network since the 1970s. It also has been wildly successful on the export market, being used by almost every NATO country and U.S. ally. The U.S. Military is now upgrading their Stinger to the new FIM-92J and FIM-92K models to effectively counter all aerial threats in the near future. The J model includes substantial improvements in lethality, updated components to help extend the “shelf life” and decrease the maintenance cost of these missiles.

The last update to the shoulder-fired Stinger occurred in the early 2000s, with the FIM-92F. This variant included a software upgrade from the FIM-92E, improving its ability to distinguish targets from countermeasures. It leveraged the programmable microprocessor that was present in Stinger missiles since the FIM-92C.

A more ambitious program, called Stinger RMP Block II was also initiated in the late 1990s, which would have incorporated a focal plane array into the Stinger to allow for even better detection. However, with the onset of the War on Terror and different budgeting priorities, this program was canned. When asked about RMP Block II, the Stinger program director at Raytheon stated that the Stinger’s detection and lethality already were more than sufficient for regular aerial threats, making the RMP Block II upgrade unnecessary.

Conversely, the FIM-92J and K upgrades improve Stinger’s capability against novel threats, namely that of small Unmanned Aerial Systems (UAS). While previous versions of the Stinger were supposedly capable against larger UAS (DoD Class 3), the FIM-92J and K have the ability to engage smaller UAS, even down to Class 1.

They gain this ability through the use of proximity fuzing.

All prior versions of the Stinger were only hit-to-kill, meaning that the missile itself would hit the target and then detonate, in an attempt to destroy the target. The FIM-92J retains this functionality and will attempt to hit-to-kill by default. However, if it determines that a hit-to-kill is not possible—due to the size of the target or other factors—it will switch to a proximity fuzing mode and then detonate when it senses it is at the closest point to the target. This makes the J and K variants far more effective against smaller UAS than earlier Stingers. While this is not exactly a new technology, as it is also used on the Igla-S MANPAD and countless other larger SAMs, it is the first time such a fuze is being used in a Stinger missile.

The difference between the J and K Stinger is the mounting platform. The FIM-92J is designed to be used from a shoulder-fired launcher, meaning the seeker is always pointed straight forward so the firer can point the system manually at the target. It also has provisions to receive cooling and power from small batteries on the launcher. The K Stinger is designed to be used from land platforms such as the Humvee Avenger. An improved datalink is added between the missile and the launcher that allows the vehicle launcher to cue the seeker to track targets the launcher may have data on. The missile also has a slightly different port configuration to accept electricity and cooling from the vehicle launcher as opposed to a shoulder launcher.

While the addition of the proximity mode is the primary lethality improvement for the FIM-92J and K, there are also smaller changes. Various technical subsystems like the gas generator are being swapped out in favor of newer designs, as the microelectronics and design of the old gas generators can be considered obsolete and hard to source. Replacing them with newer components will extend the shelf-life of Stingers in U.S. military service.

Some may ask why the United States continues to develop the Stinger missile as opposed to creating a new MANPADS like the Russians did with the Verba. The answer, as given by Raytheon, is that the Stinger fulfills all current and near future requirements for an air defense system. The threats that a NATO MANPAD might face aren’t evolving that fast, and Stinger in its current form is capable of facing them down without trouble. On the other hand, the United States and its allies are pushing out newer planes and missiles, so a fresh design is needed for Russia counter the new technology the West is putting out.