Russian Armored Vehicles Are a Mismatch for Ukraine's Army 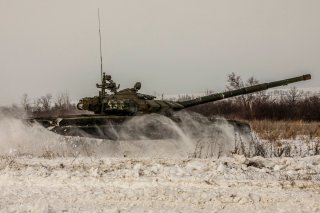 As Russian forces reportedly close in on Kyiv and other critical areas of Ukraine, it is uncertain whether there will be large-scale battles between the Russian military and Ukrainian defenders. Ukraine may not have the ability to stop or slow down a full-scale Russian invasion.

Russia has both quantitative and qualitative advantages in armored warfare against Ukraine. Some Russian armored vehicles, such as the KAMAZ SBA-60K2 Bulat Armored Personnel Carrier, were developed and procured within the last decade. Other weapons systems, like Russian T-90s tanks, entered service in the 1990s but have been upgraded substantially.

These mismatches don’t mean Ukraine lacks advantages of its own, however. Assaulting Russian mechanized forces will have to dismount and engage in close-quarters battles in some areas. Ukrainian infantry using prepared defensive positions may be able to use cover to mount surprise hit-and-run attacks on advancing Russian armored units.