Ukraine Rejects Ultimatum to Surrender the Besieged City of Mariupol 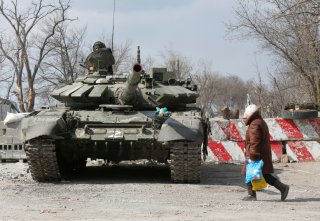 On Sunday, the Russian Defense Ministry presented an ultimatum to the leadership of the besieged Ukrainian port city of Mariupol: surrender by 5 AM Moscow time on Monday.

"We appeal to the odious bandits, who are responsible for hundreds of lives of innocent people, and now call themselves representatives of the official local authorities of this unique city Mariupol,” said Col. Gen. Mikhail Mizintsev, the chief of Russia’s National Center for Defense Management.

“It is you who now have the right to a historic choice—either you are with your people, or you are with bandits, otherwise the military tribunal that awaits you is only a minor thing that you have already deserved because of the despicable attitude towards your own citizens, as well as the terrible crimes and provocations already arranged by you,” Mizintsev said, according to the Russian state-run news outlet RIA Novosti.

Russia claimed that it will open humanitarian corridors from Mariupol “in eastern and western directions”—giving residents the choice to head westward into Ukraine or leave for Russia—and will give all combatants inside the city the chance to leave unarmed later on Monday.

Both Kiev and the local authorities have firmly rejected the ultimatum. "There can be no question of any surrender, laying down of arms" in the city, Ukrainian deputy prime minister Iryna Vereshchuk responded. "We have already informed the Russian side about this," Vereshchuk added. There are widespread concerns that the rejection could spur a renewed attempt by local Russian forces to storm the city, which has been under siege for several weeks.

The siege of Mariupol has quickly become one of the war’s major ongoing humanitarian catastrophes. Almost all attempts to evacuate the city, which had a population of approximately 400,000 people before the war, have failed. Mariupol’s remaining population has gone for weeks without access to electricity, water, or heating. Control over the port city would facilitate the creation of a land corridor between Crimea and the eastern pro-Russian separatist regions of Donetsk and Luhansk, a significant milestone in Russia’s efforts to consolidate control over eastern Ukraine.