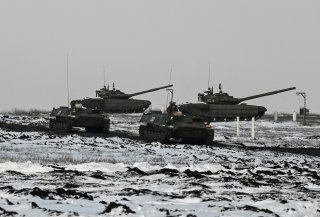 The announcement follows an hour-long presidential address on Monday in which Putin framed Ukraine as a historically and culturally inseparable part of Russia’s sphere of influence. Russian lawmakers voted unanimously on Tuesday to authorize Putin to use military force in Donbas

It is unclear if the advancing Russian forces will confine their presence to the separatist Donetsk and Lugansk People’s Republics (DNR and LNR) in the near term, or if they will seek to establish a perimeter in the broader Donbas region.

Video footage has emerged of main battle tanks (MBTs) and other military equipment rolling into the separatist-controlled city of Donetsk. The scale of the Russian intervention—both in the number of participating military personnel and the types of military equipment used—remains unknown, as do the Kremlin’s long-term military aims.

Putin characterized the deployment as a “peacekeeping” effort, following allegations from Moscow and the separatists that Ukraine is conducting a “genocide” against the majority Russian-speaking, pro-Russian population of the eastern Donbas region. U.S. Ambassador to the United Nations (U.N.) Linda Thomas-Greenfield said Moscow’s peacekeeping claim was “nonsense,” adding, “we know what they really are."

Deputy National Security Advisor Jon Finer described Russia’s Donbas deployment as an  “invasion,” a term the White House was initially hesitant to use. “We think this is, yes, the beginning of an invasion,” Finer told CNN on Tuesday. “I am calling it an invasion. We’re taking a severe response including sanctions on Russia [that] we’ll be rolling out in a matter of hours.”

The Biden administration has implemented a mild initial sanctions package involving prohibitions on “new investment, trade, and financing by U.S. persons to, from, or in the so-called DNR and LNR regions of Ukraine,” with White House press secretary Jen Psaki noting that additional measures will come later this week. British prime minister Boris Johnson announced financial restrictions on five Russian banks and three Russian billionaires—a package he described as the “first barrage” of British sanctions on Moscow. Berlin has suspended the certification process for Nord Stream 2, a natural gas pipeline running from Russia to Germany.

“Moscow has moved from covert attempts to destabilize Ukraine to overt military action,” said NATO secretary-general Jens Stoltenberg during a briefing on Tuesday. “We will continue to provide Ukraine with strong political support and allies are providing equipment to help Ukraine defend itself as well as sustained financial support.”

Western governments and intelligence sources have expressed concern that the entry of Russian troops into territories currently not under direct Ukrainian control could be followed by a full-scale invasion and occupation of all or large parts of the country.