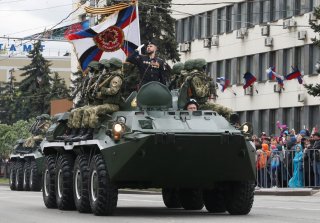 On February 15, the lower house of Russia’s parliament, the State Duma, adopted a resolution that formally appealed to President Vladimir Putin to recognize the independence of two Russian-backed separatist republics in Ukraine’s Donbas region. These two phantom states, the Donetsk People’s Republic (DNR) and Lugansk People’s Republic (LNR), respectively, have been under de facto Russian control since 2014. It remains anyone’s guess whether Putin will follow through in the coming days, and this legislative appeal does not necessarily indicate the likelihood of an invasion. Yet, the Duma has provided one of the first substantive visions of what a post-invasion Ukraine might look like from the Russian perspective.

This parliamentary intervention is relevant for different reasons to different types of analysts. First, for those keyed into ongoing negotiations and who see events on the Ukrainian-Russian border as part of a complex diplomatic bluff, the bill provides a new formal lever that Putin can use as a bargaining chip with Western interlocutors seeking an off-ramp and a potential grand bargain over Ukraine’s sovereignty and NATO status. Second, for observers of Russian domestic politics, a point of interest is that the resolution that passed the “rating vote” procedure was authored by the opposition Communist Party of the Russian Federation, which won over more cautious language written by members of the regime’s own nominal ruling party United Russia. These are both interesting aspects in their own right. But for those who are credibly convinced that the Russian buildup is a genuine preparation for a major military action, the Duma has helpfully put pen to paper on suggesting one way in which Russia officially views the political geography of Ukraine, and how it might approach a post-invasion contingency.

The Dearth of Quality Political-Territorial Signaling

The qualitative and quantitative depth of the Russian allotment of men and materiel to the Ukrainian-Russian border has given analysts good reason for viewing invasion as a serious possibility. The negotiation tactics from December through to January’s meetings in Geneva further underlined Moscow’s seemingly flippant efforts to come to the table in good faith. And both the United States and its European allies have become evidently concerned that invasion is genuinely on the table. For these reasons, the analytical camp focused on invasion has a good deal of empirical backing.

Yet even so, an important element to this framing has been notably lacking, namely, the failure of the Russian side to signal what it truly intends to do to Ukraine if negotiations fail. The Western side has received clear information on Russian desires regarding NATO, the U.S. force posture in Europe, and Ukraine’s Euro-Atlantic aspirations. Given that all of these requests have been rejected, it has been surprising why the Russians haven’t been clearer about what they will do to Ukraine if an invasion does occur.

Speculation and information on this count have come primarily from the West, through intelligence sources that have suggested regime change preparations against Ukrainian president Volodymyr Zelenskyy and the installment of a pro-Russian figurehead in Kyiv. While this is certainly possible, there are very few relevant observations in Russian state media, among lower-tier elites in Russia’s parliament, or from the public-facing national security establishment to support it. If regime change is on the table, louder messaging and the boosting of certain names to gain prominence in public opinion in Russia will become more pronounced.

Whether or not Russia already has a regime change plan in place, the Russians have not signaled it and will thus have a heavier lift in justifying a casus belli and any political settlement in its aftermath. It is instructive to draw a comparison with another great power’s major invasion of a minor power, namely, the U.S. invasion of Iraq in 2003. In that case, a clear justification for war was established and key goals were signaled, such as the overthrow and capture of Saddam Hussein and the establishment of an electoral democracy under Western tutelage. Russia has so far not telegraphed its preferred post-invasion outcome, which has considerably muddied the analytic waters for assessing potential realities in the coming weeks and months.

It is for these reasons why the Duma’s resolution on DNR and LNR statehood is relevant: it is the first attempt in an official Russian state format to signal what Russia wants to see in a reconfiguration of Ukraine’s political geography. Recognizing or annexing the separatist territories to different degrees have been raised before but with far less clarity and institutional impetus. Given credible evidence that a major invasion plan is in its advanced stage, observers are left to speculate what exactly the invasion’s political and geographic goals amount to.

Does the invasion simply annex already-occupied territory in the Donbas? This is far too big a deployment for something that could have happened without any increased military presence. Does Russia establish a “land bridge” between Russia and Crimea? This is strategically dubious, as the landscape is not defensible if the attacker sticks to an arbitrary narrow territorial corridor. Does Russia take the full territory of the Donetsk and Luhansk provinces? Does it take all Ukrainian provinces east of the Dnieper and/or south of the Vorskla? Does it add Odesa and southwestern Ukraine as well? Does it take besiege Kyiv temporarily, or decide to occupy it—and the rest of north-central Ukraine—for the medium-term? Does it annex any of this territory? Does it only occupy for the short- or medium-term? Does it partition the country into several states and de facto Russian satrapies?

These are all questions that can be answered in multiple ways—and the key problem is that we have had shockingly little to go on from the Russian side as to what Moscow’s preferred political geography in Ukraine looks like in the event that negotiations fully break down and an invasion begins. For this reason, the Duma’s proposed solution is analytically helpful. This is the partition and breakup scenario, with the DNR and LNR declared to be independent states, under guarantees of sovereignty by Russia as the neighboring regional hegemon. This is qualitatively different from Russia’s view of the separatist republics prior to this year, which preferred they stay within Ukraine and act as constitutional breaks on NATO and EU integration following the implementation of Minsk II.

Moving towards separatist statehood also gives analysts something to work with when assessing Russian designs for territorial revision. As formal sovereign entities, the DNR and LNR would be easy to grant the rest of Donetsk and Luhansk provinces to, in the event of a Russian occupation. They already formally claim authority over non-occupied territories. The separatist republics could similarly be used as paper structures to which other occupied provinces of Ukraine could be appended on a temporary basis. For example, the Kharkiv and Poltava oblasts could come under LNR administration while Zaporizhzhia, Dnipropetrovsk, and beyond are given to the DNR. Alternatively, recognizing statehood for the LNR and DNR allows other captured Ukrainian provinces to have puppet occupation governments and form a confederation to manage their collective affairs.

These speculations quickly go off the rails and are far more in the realm of grim armchair map-drawing than anything real—at least for the time being. But the Russian State Duma has at the very least provided a concrete policy to shape a post-conflict political analysis should an invasion occur.

Julian G. Waller is an Associate Research Analyst at the Center for Naval Analyses and a Ph.D. Candidate in Political Science at George Washington University.