Russia and Ukraine Prepare for a Showdown in Kherson 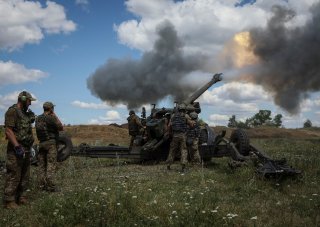 Russia is redeploying its forces to southern Ukraine as Kyiv gears up for a counteroffensive to retake the regional capital city of Kherson.

Ukrainian presidential adviser Oleksiy Arestovych said in an interview on Wednesday that the Russian military is undertaking a “massive redeployment” to occupied southern regions shortly after capturing the Vuhlehirsk power plant in eastern Ukraine. Arestovych suggested that Russia is shifting from offensive to defensive operations in a bid to thwart Ukraine’s efforts to retake the eastern and southeastern territories controlled by Russia since the beginning of the Russo-Ukrainian War on February 24. “[This would] place us in a position where we are unable to liberate all our territory and call for talks,” he added.

Ukrainian security official Oleksiy Danilov said earlier that Russia is “concentrating the maximum number of troops” in the Kherson axis, with recent reports further suggesting that Russian servicemen are being transferred in large numbers to the southern Melitopol and Zaporizhzhia regions.

Ukrainian forces struck Antonivskyi Mist, a bridge connecting Kherson with the rest of occupied southern Ukraine and Crimea, again on Wednesday. Ukrainian officials said the bridge was badly damaged and is closed to traffic indefinitely; Russian state media reports claim that the bridge suffered only minor damage and is being repaired. “Ukraine’s Armed Forces again tried to turn Antonivskyi Bridge into a sieve with their vaunted American weapons. It didn’t work. They shot all night. Our air defenses came through, across the entire line of contact. They shot down numerous HIMARS and Vilkha missiles, which filled up [Ukrainian] warehouses,” claimed Russian military expert Alexei Leonkov during a Russian television broadcast. “More importantly, [our missile defenses] promptly responded and demolished a warehouse where they stored at least 100 HIMARS missiles. Given their cost, we did more damage in one blow than Ukraine’s armed forces did in one week of shelling Kherson,” Leonkov added.

Ukrainian president Volodymyr Zelenskyy announced earlier this month that he has directed Ukraine’s Armed Forces to prepare for a large-scale counteroffensive in the Kherson region. Ukrainian deputy prime minister Iryna Vereshchuk urged locals to flee in anticipation of fierce fighting in the country’s south. “You must look for a way to leave because our armed forces will de-occupy. There will be a huge battle. I don’t want to scare anyone, everyone understands everything anyway,” she said.

Russian and Russian-aligned authorities remain unfazed in light of Ukraine’s mounting efforts to recapture its lost territories. "Zelenskyy's statement that the Kherson region will be liberated in three to six weeks is a lie. All these counter-offensives that result in a large number of Ukrainian casualties are coming to nothing," said Kherson region occupation official Kirill Stremousov, according to Reuters.