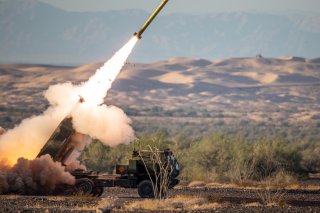 While they undoubtedly arrived later than some Ukrainians may have hoped for, High Mobility Artillery Rocket Systems (HIMARS) provided by the United States are inflicting substantial damage on Russian targets in the ongoing war in Ukraine, as the weapons open up new tactical possibilities.

“Today, the Ukrainians are effectively employing these HIMARS, with strikes against Russian command and control nodes, their logistical networks, their field artillery near defense sites and many other targets,” Gen. Mark Milley, chairman of the Joint Chiefs of Staff, told reporters following the fourth multinational meeting of the Ukraine Defense Contact Group.

Long-range ground-fired rockets, such as HIMARS, have proven critical given their ability to target Russian supply lines, troop installation, and mobile Russian rocket and missile launchers. Since neither side has air superiority, and conventional artillery can typically only travel thirty kilometers, long-range rockets such as HIMARS offer Ukrainian forces a way to limit indiscriminate Russian rocket and missile attacks on civilian areas. With a range of forty to 180 kilometers, HIMARS can target and destroy targets behind enemy lines.

“These strikes are steadily degrading the Russian ability to supply their troops, command and control of their forces, and carry out their illegal war of aggression,” Milley added.

So far, Milley noted that twelve of the more than twenty HIMARS systems committed by the United States and its allies have arrived in Ukraine, and Ukrainians are responding quickly to allied training.

“The fact that the Ukrainians were able to quickly deploy these systems speaks highly of their ability, their ingenuity, their artillery ability, their gunner capability, their determination, and their will to fight,” Milley said.

Milley also said that the United States and its allies have transferred hundreds of GMLRS (Guided Multiple Launch Rocket Systems) to Ukraine. These weapons, used since 2007, are land-fired, GPS-guided precision rockets able to pinpoint and destroy specific targets from seventy kilometers away. A stand-off weapon system of this kind is critical for the Ukrainians to blunt or slow Russian ground advances on the ground and help them target and destroy Russian supply lines, ammunition depots, and equipment storage sites. The HIMARS’s range allows Ukrainian forces to sit beyond the striking range of most standard Russian artillery, something of particular relevance in a conflict dependent on long-range fires.