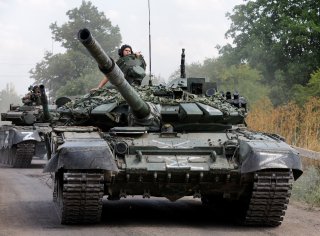 Russian and Russian-aligned forces have made significant headway in the strategically-positioned town of Soledar, according to top officials.

Chechen leader Ramzan Kadyrov said Chechen forces and troops belonging to the pro-Russian breakaway Luhansk People’s Republic (LPR) took control of the Knauf plant in the town of Soledar, located to the east of Kramatorsk. “Our fighters systematically conducted a competent and unhurried combat advance into the occupied territory, thus forcing the enemy to abandon their fortified positions,” Kadyrov announced on his Telegram channel. LPR official Vitaly Kiselyov said on Tuesday that the fighting has spilled over into the streets of Soledar. Russian outlets reported earlier that Russian forces took the villages of Volodymyrivka and Stryapivka, located to the southwest of Soledar. Russian-aligned troops have reportedly made it to the outskirts of Bakhmut, a key city located on the Kramatorsk-Sloviansk axis. Russia’s recent slew of claimed advances in eastern Ukraine has not been independently corroborated.

The cities of Sloviansk and Kramatorsk, located just across from one another, are the last major Ukrainian outposts in the eastern Donbass region. Ukrainian military officials say Russian forces have mounted a renewed ground offensive to consolidate control over the Donbass region. "In the Donetsk direction, the enemy is conducting an offensive operation, concentrating its main efforts on the Bakhmut and Avdiivka directions. It uses ground attack and army aviation," the Ukrainian General Staff reportedly said on Facebook.

The new Russian offensive has been accompanied by a sharp uptick in shelling and missile attacks against major Ukrainian cities and defensive positions. “The situation in the region is tense – shelling is constant throughout the front line … According to Reuters, the enemy is also using air strikes a great deal,” Donetsk regional governor Pavlo Kyrylenko told Ukrainian media. The southern district of Nikopol was reportedly hit by as many as sixty Russian rockets, damaging dozens of buildings and leaving thousands of locals without access to water. “After midnight, the Russian army struck the Nikopol area with (Soviet-era) Grad rockets, and the Kryvyi Rih area from barrel artillery,” Ukrainian official Valentyn Reznichenko wrote on Telegram.

Even as Russian troops claim to be slowly gaining ground in the Donetsk area of Donbass, Kyiv says its forces captured the town of Dovhenke and are advancing toward the major Russian-held city of Izium in the Kharkiv region. “The situation is very interesting. Ukraine’s forces are moving very successfully. Attempts by Russia to regain lost ground were not successful. Ukraine may end up encircling them,” Ukrainian presidential adviser Oleksiy Arestovych said in an interview published on YouTube.