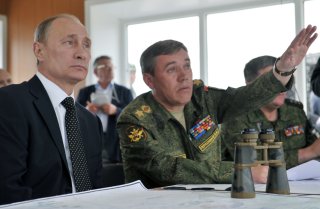 Gen. Valery Gerasimov, chief of staff of Russia’s armed forces and one of the country’s top military officials, embarked on a “highly unusual” journey to the front lines in Ukraine in an apparent attempt to influence the course of the war.

Citing a senior Ukrainian official and two U.S. officials, the New York Times reported on Sunday that Gerasimov had been in the Russian-controlled eastern Ukrainian town of Izym in recent days. “Our working assumption is that he was there because there’s a recognition they haven’t worked out all their problems yet,” said one of the officials. Gerasimov’s visit comes on the heels of Western intelligence assessments that the Russian military is struggling to meet its objectives in the ongoing battle for the Donbas region. The consolidation of Russian control over the Donbas region would put Russian forces in a renewed position to threaten the capital city of Kyiv and the strategic southwestern port city of Odesa. By the same token, a defeat in the Donbas could make it exceedingly difficult for the Kremlin to achieve its war aims without resorting to potentially catastrophic escalation.

The Ukrainian official told the New York Times that Ukraine’s armed forces launched a strike on Russia’s Izym command center, but not in time to catch Gerasimov. The Ukrainian official added that 200 soldiers, including a general, were killed by the attack, a claim that has not been confirmed by U.S. intelligence. Unverified reports and social media posts have alleged that Gerasimov was wounded by the strike, with the Daily Mail citing a claim purportedly made by a senior Russian official that Gerasimov sustained “a shrapnel wound in the upper third of the right leg without a bone fracture.” U.S. officials have reportedly confirmed that Gerasimov was in the Donbas region, but they could not corroborate assertions that he was wounded.

General Gerasimov is assessed to be one of only three people, with the others being Russian president Vladimir Putin and Defense Minister Sergey Shoigu, involved in planning Russia’s invasion of Ukraine. Gerasimov’s trip makes him the highest-ranking Russian uniformed officer to visit Ukraine since the start of the war.

It is not immediately clear whether Gerasimov’s trip brought with it any significant changes to the Russian military’s practices or battlefield goals as the war in Ukraine enters its third month. The trip was preceded by Putin’s decision to appoint Aleksandr Dvornikov, acting commander of Russia’s Southern Military District and the leader of Russia’s military campaign in Syria, as the top commander for Russian forces in Ukraine. The change was made with the intention of streamlining Russia’s military operations in Ukraine, which have reportedly suffered from poor cohesion between local units and a frequent lack of timely access to relevant battlefield information.