Russia Warns of Plots to Partition Ukraine as War Grinds On 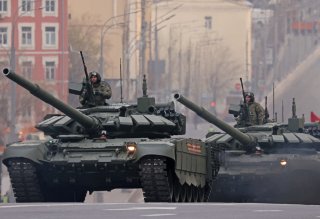 On Thursday, Sergei Naryshkin, the chief of Russia’s Foreign Intelligence Service (SVR), accused Washington and Warsaw of plotting to gain a sphere of influence in western Ukraine.

“According to the intelligence received by Russia’s Foreign Intelligence Service, Washington and Warsaw are working on plans to establish Poland’s tight military and political control over its historical possessions in Ukraine,” read a statement issued by the SVR, as per Reuters.

Poland has denied the claim, characterizing it as part of a Russian disinformation operation. “The lies about Poland’s alleged plans to attack western Ukraine have been repeated for several years,” Stanislaw Zaryn, spokesman for Poland’s special services coordinator, said per Reuters. “The aim of Russian propaganda is to foster distrust between Ukraine and Poland, to undermine PL-UA cooperation.”

The allegation may be intended as a signal that Russia seeking to lay the groundwork for a forced partition of Ukraine. Even if fabricated, the partition scheme sheds light on Russia’s priorities three months into the war; the claim could be interpreted as a trial balloon to see how the West would respond to an outcome that falls short of Russia’s core objective to achieve regime change in Ukraine, but still leaves the Kremlin with a significant chunk of Ukrainian territory to show for its costly military venture.

Under this scenario, the Polish force would presumably occupy the parts of Ukraine that have historically belonged to Poland, including Lviv, Ivano-Frankivsk, Ternopil, and Lutsk, under the pretense of enforcing a humanitarian no-conflict zone. The invading Russian army will meanwhile have seized control of everything east of the Dnieper River, leaving just central Ukraine intact. The parts under Polish control will eventually be absorbed into Poland proper—with the exception of Transcarpathia, which Russian sources believe will be gobbled up by Hungary—and become NATO territory by extension. Meanwhile, the eastern half of the country would be administered by Russia through a mix of proxy governments and direct annexation. The remaining parts of Ukraine could then take the form of an economically crippled, demilitarized rump state acting as a buffer between Russia and the West.

There is no evidence to suggest that the White House and Warsaw are planning anything along these lines. Neither the Biden administration nor any of the Western allies involved in the maximum-pressure campaign against Moscow have offered any indication that they are willing to take part in a settlement or military solution that does not fully respect Ukraine’s territorial sovereignty within its internationally-recognized borders. The White House’s current strategy, particularly in light of President Joe Biden’s Thursday proposal to spend $33 billion on Ukraine, appears to center on keeping the conflict going indefinitely with a view to weakening Russia over the long term. A partition scheme, especially one initiated at a time when the Russian military is seemingly struggling to make significant gains in Ukraine, is in total misalignment with these aims.

Nevertheless, depending on how the situation on the ground plays out in coming months, the Kremlin may yet find itself in a position to force a partition-style outcome.

If Russia wins the ongoing battle for Donbas, it will have succeeded in tangibly degrading Ukraine’s ability to contest the eastern half of the country. The consolidation of Russian control over large swathes of eastern Ukraine would resuscitate Russia’s sputtered military campaign; there would potentially be little to stop the invading Russian forces from striking out in the direction of the strategic southwestern port hub of Odessa or returning to the Kyiv region for a second go at Ukraine’s capital. Even if those campaigns end in a stalemate, Russia may well be able to hold on to territories gained in Ukraine’s east. The absorption of western Ukraine into Poland requires a degree of explicit Western acquiescence; the dismemberment of Ukraine along the Dnieper River does not.

But such an outcome remains a distant possibility—one that is largely contingent on the Kremlin’s ability to salvage its war in the east, where it enjoys distinct advantages in the form of shorter supply lines and more advantageous terrain. The West is seeking to offset these advantages with continued shipments of heavy weapons systems and real-time intelligence sharing. It is unclear whether U.S. intelligence services and the Pentagon are providing Ukraine with information to strike Russian targets in Russia. The Kremlin has warned such strikes would lead to retaliatory attacks on decision-making centers in Kyiv, including those that it says are staffed by Western military advisors.

These attacks are being publicly lent moral legitimacy if not military support by Western officials. The United Kingdom’s armed forces minister James Heappey told a British media outlet earlier this week it is “completely legitimate for Ukraine to be targeting in Russia’s depth in order to disrupt the logistics that if they weren’t disrupted would directly contribute to death and carnage on Ukrainian soil,” adding that it is “not necessarily a problem” if British-donated weapons were used to hit sites on Russian territory.

Moscow lashed out at Heappey’s comments, with Russia’s Defense Ministry announcing that “London’s direct provocation of the Kyiv regime into such actions, if such actions are carried out, will immediately lead to our proportional response.” Editor-in-chief of Russian state media outlet RT Margarita Simonyan was blunter: “The Anglo-Saxons are publicly calling on Ukraine to take the combat activity into Russian territory. And giving them the ammo to carry out that plan,” she said, according to Newsweek. “What choice are you leaving us, idiots? Complete destruction of what remains of Ukraine? A nuclear strike?”

Her position does not necessarily reflect Kremlin policy, though the threat of nuclear escalation continues to loom large as Moscow struggles to make meaningful military headway sixty-five days into a war it views as an existential conflict for Russia’s very existence. Moscow is under mounting pressure to produce meaningful battlefield victories by May 9, which is the major annual holiday when Russia commemorates the Red Army’s victory over Nazi Germany in World War II.