Will Russia Win the War for the Donbas? 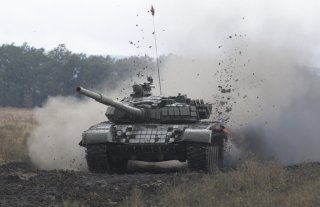 As Russian forces gear up for an eastern offensive that both sides say will be decisive to the course of the war, the prospects for meaningful peace talks to end the biggest humanitarian catastrophe in Europe since 1945 appear dimmer than ever.

The Russian military has clarified its aims as the war in Ukraine enters its second phase. “Since the beginning of the second phase of the special operation, which began literally two days ago, one of the tasks of the Russian army is to establish full control over Donbas and southern Ukraine. This will provide a land corridor to Crimea,” Maj. Gen. Rustam Minnekaev, the acting commander of Russia’s Central Military District, said on Friday, according to state news outlet TASS

It remains unclear whether Russia intends to control the key southwestern port hub of Odessa outright or through proxy state arrangements resembling the breakaway Russian-aligned Donetsk and Luhansk People’s Republics (DPR and LPR), nor has the Kremlin revealed its plans for Ukrainian territories already under Russian occupation. The secretary of Ukraine’s National Security and Defense Council, Oleksiy Danilov, vowed in an interview with Ukrainian outlet Ukrayinska Pravda that there will be no “Kherson People’s Republic,” referring to the occupied southern city of Kherson. The Kremlin may be seeking to prove him right; according to recent reporting, Russian politicians are entertaining plans to absorb Kherson into Russia proper by organizing a referendum that would make it part of neighboring annexed Crimea.

Russian Foreign Ministry spokeswoman Maria Zakharova said on Friday that Moscow submitted a peace proposal to Kyiv on April 15 but has yet to hear back from the Ukrainian side. “Russia never expressed a refusal to negotiate,” she added. Zakharova’s comments were echoed by Kremlin spokesman Dmitry Peskov. “At the present time, the Ukrainian side has received our draft document, which includes precisely formulated points. The ball is in their court. We await an answer,” Peskov said.

Ukrainian presidential advisor Mikhail Podolyak confirmed on April 20 that Ukraine received the Russian proposals and will study them in coming days.

Though Ukraine has not yet formally provided an answer, Secretary of the National Security and Defense Council Oleksiy Danilov expressed pessimism over the possibility of a peace deal on Friday. “[War may return] at any time. I do not believe in any peace agreement with the Russian Federation. Over time in our history, we have experienced this on many occasions. They [peace agreements] were constantly violated,” he told reporters.

British prime minister Boris Johnson warned this week that Russia-Ukraine peace talks are doomed because of Russian president Vladimir Putin’s lack of good faith. “It is very hard to see how the Ukrainians can negotiate with Putin now given his manifest lack of good faith,” he told reporters. “How can you negotiate with a crocodile when it’s got your leg in its jaws? That’s the difficulty that the Ukrainians face. We have just got to keep going with the strategy, keep supplying them with weapons,” he said.

Both Moscow and Kiev appear to believe that the coming battles in Donbas and to the country’s south will prove decisive to the outcome of the war.

“For us, the battle for Donbas is very important. It is important for different reasons, for the reason of safety, first of all. Our grouping located in Donbas is one of the best military we have. It’s a large grouping and Russia wants to encircle them and destroy them,” said Ukrainian president Volodymyr Zelenskyy in an earlier interview, adding that the coming battles “can influence the course of the whole war.”

If Ukraine can inflict a major defeat on Russia’s forces in the Donbas region, the Kremlin will be left with drastically limited options for continuing this war. As a consequence of potential Russian failure in Donbas, two of the invasion’s original aims—regime change and the permanent degradation of Ukrainian military capabilities—could become nearly impossible to achieve without resorting to catastrophic nuclear escalation.

But if the Russian military can successfully isolate Ukraine’s eastern troops into pockets and destroy them, Moscow will have neutralized a large chunk of Ukraine’s trained armed forces units. As noted by  Daniel Davis, a retired Lt. Col. and senior fellow at Defense Priorities, there would be little to stop the Russians from consolidating control over the greater Donbas region and moving forward with the siege of Kharkiv, Ukraine’s second-largest city. A decisive victory in Donbas would put Russian forces in a propitious position to strike out in the direction of Odessa and, eventually, to return to the Kyiv region.

The Kremlin’s timetable for the war in Ukraine is being driven by a powerful domestic consideration: Western military officials say Moscow is racing to produce major battlefield victories by May 9, which is the day when Russia celebrates the Soviet victory over Nazi Germany in World War II.

With both sides seemingly holding out for greater leverage, meaningful peace talks are likely not in the cards until the Battle for Donbas is decided.

Boris Johnson urged the West on Friday to brace for the “realistic possibility” that Russia could win the war, describing the situation on the ground as “unpredictable.” As the invasion of Ukraine enters its second month, Johnson’s statement marked the first public admission by a Western leader that Russia could prevail. It remains to be seen whether or not NATO’s major members will seek to adjust their approach, which has so far centered on coordinating an unprecedented arms transfer program aimed at helping Ukraine repel and possibly defeat the Russian invasion, if the Kremlin achieves significant battlefield gains in the country’s eastern regions over the coming weeks.