In the Looming Battle for the Donbas, Russian Forces Hold the Upper Hand 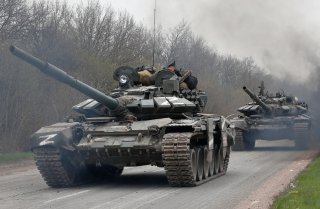 As the war in Ukraine enters its second phase, the looming battle for Donbas could prove decisive for both sides.

“For us, the battle for Donbas is very important,” Ukrainian president Volodymyr Zelenskyy told CNN in an interview on Sunday. “It is important for different reasons, for the reason of safety, first of all. Our grouping located in Donbas is one of the best military we have. It's a large grouping and Russia wants to encircle them and destroy them,” he said. "This battle—and it can happen, so there will be several battles and we don't know how long it is going to take—can influence the course of the whole war,” Zelenskyy added.

If Ukraine’s armed forces manage to thwart Russia’s offensive in the east, it may become exceedingly difficult for the Kremlin to achieve its apparent wartime aims of ousting the current government in Kiev and drastically degrading Ukraine’s military capabilities. Depending on the scale of Russia’s defeat, it could even set the stage for a Ukrainian counteroffensive into the Russian-aligned breakaway Donetsk and Luhansk People’s Republics.

But the costs of defeat are just as high for Ukraine as they are for Russia. The loss of the Donbas, which comprises a large section of the country’s eastern territories and has historically housed the bulk of its industrial output, risks reducing Ukraine to the status of an economically crippled rump state. It would resuscitate Russia’s sputtered military campaign, putting the invading forces in a position to strike out toward the strategic southwestern port hub of Odessa or prepare for a second campaign to seize the Ukrainian capital.

As Zelenskyy noted, the Kremlin’s immediate goal in the Donbas is not to occupy the region’s major cities but to encircle and destroy a pocket of up to 50,000 local Ukrainian troops. The elimination of these forces would greatly degrade Ukraine’s ability to contest the Donbas region, allowing Russian forces to more easily isolate Ukraine’s remaining ground units and progressively consolidate control over the entire region.

Whereas the forested areas outside of Kiev favored Ukrainian ambush tactics, the flat and open landscape of the Donbas region plays to Russia’s strength in quickly mobilizing large mechanized formations. U.S. officials assessed that Russia has considerably reinforced its troop presence in eastern and southern Ukraine in anticipation of the Donbas campaign, adding eleven more battalion tactical groups. Russia’s failure near Kiev was due in large part to severe logistical problems, most vividly illustrated by the ill-fated forty-mile-long convoy that lingered on the outskirts of Kiev for weeks before dispersing. These conditions will likely not hold in the Donbas, where Russian supply lines are much shorter and better secured. By almost every relevant battlefield metric, Russian forces seem significantly better positioned in the east and southeast than in the war’s aborted northern theater.