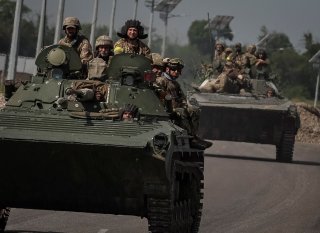 Russian and Russian-aligned separatist forces have captured the twin cities of Severodonetsk and Lysychansk, the last Ukrainian-held strongholds in the Luhansk area. The Russian military and pro-Russian separatists from the Donetsk People’s Republic (DPR) are now redoubling their efforts to capture the entire Donetsk province, about half of which is still held by Ukrainian forces. Russian battalion tactical groups (BTGs) are expected to advance in the direction of the eastern cities of Sloviansk and Kramatorsk, which are currently being pounded by relentless Russian airstrikes.

Sloviansk’s mayor Vadim Lyakh urged residents to flee on Tuesday. “Artillery is already hitting the city,” he said, citing multiple civilian deaths in the aftermath of reported Russian strikes in residential areas. The mass evacuation of civilians began in Sloviansk as the Russian bombing campaign there intensifies, with multiple reports of rockets hitting the city’s central marketplace.

Local officials said at least two people were killed and seven more were injured in the strike, with Donetsk regional governor Pavlo Kyrylenko accusing Russia of deliberately targeting “areas where civilians congregate.” Ukrainian military officials say Russia’s immediate goal is to take the two smaller cities of Siversk and Bakhmut, which would put their forces in a position to advance on the Sloviansk-Kramatorsk axis.

Ukraine’s military acknowledged that Russian forces have made some progress in the hamlet of Mazanivka, located to the northwest of Sloviansk, and skirmishes have been reported in the nearby village of Bohorodychne as Russian forces seemingly try to replicate the encirclement tactics they previously used during the fighting in and around Severodonetsk and Lysychansk.

Sloviansk, a crucial supply point for Ukraine’s beleaguered troops in the Donbas region, is set to become the site of a major battle in Russia’s campaign to capture the Donetsk province. Ukrainian officials, normally loath to discuss internal casualty figures, confirmed in June that up to 1,000 Ukrainian soldiers are being wounded or killed per day in the Donbas region. The Russian offensive in eastern Ukraine has seen slow but steady progress, though Moscow’s overarching war aims remain unclear four months into the conflict.

Military experts have assessed that the invading Russian forces could be seeking to advance as far as the city of Dnipro in an effort to cut Ukraine off from parts of the Dnieper river, though these reported plans have not been confirmed by Russian officials.