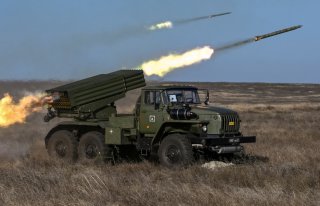 The first high-level talks between Ukraine and Russia since the February 24 invasion were held on Thursday in Antalya, Turkey.

In a rare moment of consensus, the warring parties all but agreed on the lack of any serious progress. “Ukraine is strong. Ukraine is fighting. Ukraine made Russian initial plans fail,” said Ukrainian foreign minister Dmytro Kuleba. “We are ready to seek balanced diplomatic solutions to put an end to this war, but we will not surrender.” Russian foreign minister Sergey Lavrov framed the invasion, which Moscow refers to as a  “special military operation,” as a “life-or-death struggle for Russia’s place on the political map of the world,” reaffirming the Kremlin’s prior signals that Russian president Vladimir Putin will accept nothing less than Ukraine’s total capitulation.

The Kuleba-Lavrov meeting was followed by what appears to be a renewed Russian offensive across Ukraine, with news of large-scale airstrikes against a slew of major cities to the country’s west. The Russian military struck the airport at Lutsk, which is located some 70 miles from the Polish border, and an airfield in the western province of Ivano-Frankivsk; military experts say these actions are part of concerted Russian efforts to interdict ongoing Western arms shipments to Ukraine.

After being stalled for several days, Russian troops on the outskirts of Kyiv appear to be regrouping for a large-scale assault; U.S. officials say the invading forces are now only nine miles away from the capital city. It was reported on Friday that the small eastern city of Volnovakha had fallen to Russian-aligned separatist forces; the southeastern port hub of Mariupol and Kharkiv, Ukraine’s second-largest city, are both encircled and subject to constant airstrikes and shelling by the besieging Russian forces. The Russian military is now targeting the strategically situated central city of Dnipro with airstrikes as part of what appears to be Moscow’s broader war plan of cutting Ukrainian forces off from territories east of the Dnieper River.

Ukrainian president Volodymyr Zelenskyy said last week that more than 16,000 foreigners, drawn mainly from NATO countries, have volunteered to fight in Ukraine’s “international legion.” Not to be outdone, Russian defense minister Sergey Shoigu told Putin during a meeting of Russia’s Security Council on Friday that the Russian military has received over 16,000 applications from “the Middle East and Syria” to fight for Russia in the eastern separatist territories of Donetsk and Luhansk. “If you see that there are people who want on a voluntary basis, especially not for money, to come and help people living in Donbas, well, we need to welcome them and help them move to the war zone,” Putin said.

Russian officials and politicians, up to and including Putin and Lavrov, continue to insist the Russian military action in Ukraine is going according to plan. Still, it remains unclear what the original invasion plan was—there have been no verifiable timetables or other published documents to corroborate exactly what the Russian military aims to accomplish in Ukraine and how quickly.

To the extent that the invading Russian forces underestimated Ukraine’s capacity to resist, they were not alone. Western intelligence sources expected Kiev to fall in as little as forty-eight hours in the months leading up to the invasion; Chairman of the Joint Chiefs of Staff Gen. Mark Milley gave Ukraine’s capital city no more than seventy-two hours in Congressional closed-door briefings conducted in early February. But it has not been conclusively established that these Western assessments were widely shared by Russian intelligence, much less that they informed the specific invasion plan approved by Putin. Russian military experts claim the operation is being deliberately conducted at a slower pace to minimize collateral damage. “If the supreme commander-in-chief set a timetable of 3-4 days, believe me, the operation would have been completed in that timeframe. [But] the Russian troops are acting discreetly, neutralizing vectors of military resistance with precision. If the operation is sped up, there will inevitably be huge losses among the Russian forces and civilian population,” Major-General Sergey Lipovoy told Russian media.

Nevertheless, there have been signs that the invading Russian forces are encountering significant resistance on the ground. The Ukrainian government claims 12,000 Russian soldiers were killed since the start of the invasion; the Pentagon puts that number closer to 2,000-4,000. The Kremlin last shared Russian casualty numbers on March 2, when Russian Defense Ministry spokesman Maj. Gen. Igor Konashenkov said 498 Russian soldiers were killed while claiming that 2,870 Ukrainian troops died in the same period. The Ukrainian government has not published its own figures regarding Ukrainian troop casualties. The Russian Defense Ministry repeatedly claimed over the past week to have achieved air superiority over Ukraine, but U.S. defense officials say the Ukrainian Air Force retains about 80 percent of its fixed-wing capabilities. A U.S. official told reporters on Friday that the Ukrainians are “flying about five to 10 sorties per day,” compared to “roughly 200 from the Russians,” as per CNN.

Western experts have argued that the Russian war effort is being stymied by a constellation of logistical, intelligence, command and control, and operational shortcomings. Still, others have assessed that the Kremlin could have prioritized its own political assumptions over sound military strategy. Putin framed the operation as an effort to “liberate” the Ukrainian people from the “band of neo-Nazis and drug addicts” holding them hostage. Moscow may have fallen prey to the ideologically-driven assumption that the government in Kiev, crippled by unpopularity and disloyalty in its military ranks, would be forced to capitulate in the invasion’s opening stages, and that the advancing Russian forces would be overwhelmingly greeted as liberators in Ukraine’s major cities. In short, Moscow may have bought into its own rhetoric that this is not a real war but merely a “special military operation” to decapitate Ukraine’s leadership and force regime change.

As the conflict enters its third week, the Russian military appears to be retrenching and adjusting its tactics in anticipation of a prolonged, large-scale war that could eventually envelop all of Ukraine, not just the country’s central and eastern regions. Hopes for a negotiated settlement remain exceedingly dim, as does the prospect that Moscow can be compelled to reverse course through any number of sanctions or battlefield setbacks.

The Kremlin has demonstrated that it is grimly determined to impose a military solution in Ukraine, no matter the mounting troop death tolls, heavy costs to Russia’s economy, and devastation of Ukraine’s civilian population.