Ukraine Pleads for Heavy Weapons Amid Russian Gains in the Donbass 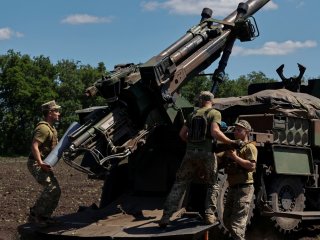 As Russia gains the upper hand in its Donbass offensive, Kyiv is calling for a drastic and immediate boost in Western military aid to Ukraine.

Ukrainian president Volodymyr Zelenskyy vowed on Monday that Ukraine will liberate all of its territories from Russia, including the Crimean peninsula, if it receives enough military support from the West. "It only takes enough weapons to make it happen. The partners have it. In sufficient quantities. And we work every day for the political will to give us these weapons to appear," he said.

Zelenskyy’s comments come on the heels of slow but steady Russian advances in the eastern Donbass region. Russian forces have all but consolidated control over the strategically positioned city of Severodonetsk and have begun moving in the direction of Sloviansk, one of the last major Ukrainian strongholds in the Donbass.

“This is an artillery war now,”  Vadym Skibitsky, deputy head of Ukrainian military intelligence, told the Guardian. "Everything now depends on what [the West] gives us. Ukraine has one artillery piece to 10 to 15 Russian artillery pieces. Our western partners have given us about 10% of what they have,” he added.

Kyiv, which has not published data on Ukrainian casualties throughout the course of the war in an effort to maintain troop morale, announced last week that up to 200 Ukrainian servicemen are dying per day as the fighting rages in the country’s east and south.

Western countries have sent heavy weapons to Ukraine, including M270 multiple-launch rocket systems (MLRS) systems from the United Kingdom and M142 High Mobility Artillery Rocket Systems (HIMARS) from the United States, but not nearly in the quantities being requested by Kyiv.

A senior U.S. defense official told CNN that Washington expects further announcements of Western weapons transfers to Ukraine following a fifty-nation contact meeting in Brussels on Wednesday. Although the official did not clarify which weapons Ukraine will receive and who will be sending them, they noted that the West remains attentive to Kyiv’s security needs as the war in Ukraine drags into its fourth month. "We have far from exhausted the resource and the multi-country security assistance for this battle on Ukrainian territory," the official added.

The Brussels contact meeting, led by Secretary of Defense Lloyd Austin, seeks to “identify and examine the next steps needed to help Ukraine defend itself from Russian aggression,” according to a Defense Department press release.