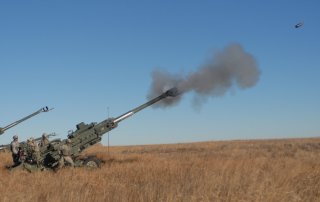 As eastern Ukraine’s open plains become mired in heavy fighting between the Russian military and Armed Forces of Ukraine, Kyiv’s forces are requesting the ability to target and kill with precision from long distances. And the U.S. Department of Defense is on the case.

“We’re doing the best we can to meet their -- their capabilities in as near real-time as we can,” Pentagon spokesman John Kirby told reporters, according to a transcript. And we keep trying to make those capabilities match what’s going on on the ground. And what's going on on the ground right now is a very artillery heavy, long-range fire heavy fighting in the Donbas.”

Not surprisingly, the Pentagon is working intensely to supply Ukraine’s military with what it needs to fight Russia. Several months ago, Ukrainian president Volodymyr Zelenskyy told CNN that he wanted Multiple Launch Rocket Systems (MLRS), among other things, which would allow his forces to attack and destroy Russian missile and rocket launchers before they can bombard Ukraine’s cities. Many of Russia’s known rocket systems—which continue to kill civilians, wreak havoc, and decimate entire communities—operate with mobile launchers and could be tough to pinpoint and attack. Most of all, the launchers are simply too far away to be easily destroyed; many of Russia’s rockets travel several hundreds of miles before striking their targets.

Kirby said the United States continues to work with its allies to respond to Ukrainian needs and deliver requested aid. “[A]s we work these packages, these weapons and systems that were sent to Ukraine, I mean, we're doing it mostly with an eye towards what does Ukraine need in the fight that they're in right now? And the -- and the consistent answer that we get back is they need long range fires, because the terrain in the Donbas region, that kind of fighting that they're doing is heavily reliant on that…,” Kirby told reporters.

Since most long-range 155mm artillery, including the U.S. M777 howitzers that are now being supplied to Ukraine, can’t reach longer than 30 km, long-range fires are the only way to attack Russian launch sites.

And considering Russia’s robust air defenses, Ukrainian fighter planes will certainly face difficulties attacking from the air. Consequently, the best possibility to disrupt or destroy Russia’s ability to launch indiscriminate rocket and missile attacks on Ukraine, apart from invading and occupying Russian territory, would be to destroy the launchers at stand-off ranges with precision fires.

“The -- the reason you're not hearing about tanks and airplanes is … that the main need that the Ukrainians continue to stress is for long-range fires. And so, we've been working on and helping them get, you know, systems that help them with long range fires. But that’s still happening,” Kirby said.