Will Russia’s Severodonetsk Offensive Decide the Fate of the Donbass? 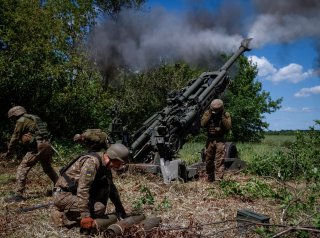 As street battles continue for control of the key city of Severodonetsk, Russian forces are mounting a new offensive in the direction of Sloviansk in an effort to consolidate their presence in Ukraine’s eastern Donbass region.

Ukrainian president Volodymyr Zelenskyy said the ongoing battle for Severodonetsk could decide the course of Russia’s Donbass campaign. "In many respects, the fate of the Donbass is being decided there," he said. "Our [forces] now again control only the outskirts of the city, but the fighting is still going on, our [forces] are defending Severodonetsk,” Zelenskyy added. "It is impossible to say the Russians completely control the city.”

Russian forces stormed Severodonetsk in late May after advancing on the city from three directions in an attempt to encircle the large pocket of Ukrainian troops that took up positions there. Russian and Russian-aligned military officials from the separatist Donetsk and Luhansk People’s Republics reported that Russian forces seized most of Severodonetsk, though Ukrainian forces have allegedly entrenched themselves in the city’s industrial zones.

The situation on the ground remains fluid, with both sides claiming battlefield successes in recent weeks. Though Kyiv previously announced major gains inside the city following reports of a large-scale counterattack, regional governor Serhiy Gaidai reportedly told a local media outlet on Thursday that Ukrainian forces have been pushed to the outskirts of Severodonetsk. There have been conflicting reports over the course of June as to whether or not Ukraine’s top military brass has formally approved a withdrawal of its forces from the city.

The bulk of Ukraine’s local forces are reportedly making a last stand in nearby Lysychansk, sitting just across the river from Severodonetsk. DPR official Danil Beznosov told a Russian state media broadcast that Lysychansk is on the verge of being fully encircled. “The question of Lysychansk's encirclement will be handled in the near future, I think. Though, forecasts in wartime are a thankless task. But we have serious forces and guys there,” he said on Thursday.

“As soon as the issue with these settlements is resolved, I think things will move faster in the remaining territories, meaning Kramatorsk and Artyomovsk,” Beznosov added. Kramatorsk is a strategically positioned city to the south of Sloviansk, one of Ukraine’s last strongholds in the Donbass region.

Russian forces have mobilized as many as twenty battalion tactical groups in the direction of Sloviansk, according to Ukrainian officials. Both Kramatorsk and Sloviansk have come under relentless Russian shelling and airstrikes in recent weeks.