Does Trump Have Evidence Vindman is a 'Never Trumper'? 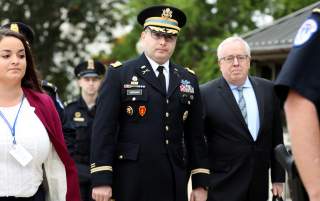 President Donald Trump teased the release of information Sunday he says will show that a National Security Council official who provided damning testimony in the Democratic impeachment push is a so-called “Never Trumper.”

In a press gaggle with reporters, Trump criticized Lt. Col. Alexander Vindman, the director for European affairs on the National Security Council. Vindman told lawmakers on Oct. 29 that he raised concerns with White House lawyers following Trump’s phone call on July 25 with Ukrainian President Volodymyr Zelensky that is at the center of a Democratic-led impeachment inquiry.

The impeachment push began after revelations that a CIA analyst filed a whistleblower complaint regarding the phone call and other Trump actions toward Ukraine.

Trump provided few clues about the information he plans to reveal about Vindman, who earned a Purple Heart for injuries sustained in the Iraq War. But the Republican did refer to a previously unreported letter he said Vindman submitted to White House lawyers regarding the phone call with Zelensky.

“Why didn’t the lieutenant colonel say that he wrote a letter to the White House with certain little comments about the phone call?” said Trump, who asserted that officials like Vindman who had a problem with his phone call were “Never Trumpers.”

A reporter asked Trump what evidence he had that Vindman opposed him politically.

“We’ll be showing that to you real soon, OK?” he replied.

Democratic California Rep. Adam Schiff, who is leading Democrats’ impeachment inquiry, said in response to Trump’s remarks that “efforts to intimidate or threaten” Vindman “will further build the case for obstruction,” which he said is an impeachable offense.

“The president continues to target public servants, including those who have served their country in combat, with baseless attacks,” Schiff wrote on Twitter.

Trump also reiterated his calls Sunday that the whistleblower be identified.

“The whistleblower should be revealed because the whistleblower gave a false story. Some people call it a fraud,” he said. “I won’t go that far, but when I read it closely, I probably would.”

He chided the press for declining to identify the whistleblower, even though reporters “know who it is.”

“You just don’t want to report it,” Trump told reporters, adding that journalists would be “doing the public a service” if the whistleblower was exposed.

Lawyers for the whistleblower have urged the media not to identify their client, saying that he could be in physical danger if exposed.