Does Turkey Need NATO's Help To Fight Off Russia In Syria? 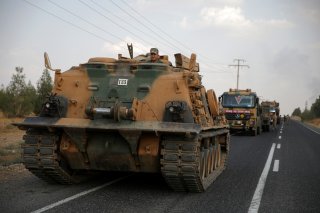 Here's What You Need To Remember: The question is whether Turkey and Russia have irreconcilable goals, or merely differing goals that can be mutually satisfied. Turkish troops occupy northeastern Syria, ostensibly to create a buffer zone between Syrian Kurds who have formed a breakaway region from the Syrian government, and Turkish Kurds who have long battled the Turkish government in a bid for independence

Turkey and Russia are hardly equal in size or military capability.

But should Turkish and Russian forces actually engage in combat in Syria, Turkey would have the edge, according to one American analyst.

“The correlation of forces is decidedly against Russia in Syria,” says Michael Kofman, a researcher at the Center for Naval Analyses thinktank, and an expert on the Russian military.

How could this be? Russia is a former superpower that still retains a large military and the world’s biggest arsenal of nuclear warheads. Turkey, though one of the strongest members of NATO, is a middleweight power that lacks nuclear weapons.

But as in real estate, location is everything. Russia’s overall military superiority doesn’t translate into superior strength on the ground in northeastern Syria, where Moscow’s Syrian ally has launched an offensive to recapture Idlib province – on the Syria-Turkish border – from Turkish troops and Turkish-backed Syrian rebels.

Russia has only one major airbase in Syria – Khmeimim airbase near the port of Latakia in northwestern Syria – and a naval base at Tartus. This creates a vulnerability, as does the dependence of Russian forces – estimated to include several thousand troops and dozens of warplanes – on ships to bring their supplies Those vessels must transit from the Black Sea – through the Bosporus straits which are controlled by Turkey – before they can reach Syrian ports in the eastern Mediterranean. And unlike the U.S.,  Russia does not have a substantial airlift capacity to sustain an overseas expeditionary force.

These infrastructure and logistical constraints mean Russia can’t beef up its present forces in Syria much beyond their present level, Kofman believes.  “In a scenario where Russia has one airbase, a presence that is not scalable, a presence that requires access to the Bosporus for logistical support, the Russian forces are actually in a very vulnerable position,” he says.

A Russian retaliatory strike on Turkey itself would also be risky. While NATO is unlikely to support Turkey’s campaign in Syria – which is outside the alliance’s zone – it would be obligated to aid a member whose national territory has been attacked.

To be clear, neither Turkey nor Russia is looking for a military confrontation with each other. Indeed, in early March 2020, Turkish president Recip Erdogan flew to Moscow to sign an agreement with Russian president Vladimir Putin that calls for a cease-fire in Idlib, and a security corridor along the M4 highway that will feature joint Russian-Turkish patrols.

The situation resembles the Cold War, where the U.S. and Soviet Union avoided direct clashes and instead battled through proxy forces. In February 2020, after Syrian airstrikes killed 33 Turkish soldiers, Turkey retaliated with its own strikes – including attacks by armed drones – on Syrian troops and shot down three Syrian warplanes. While a Turkish F-16 did shoot down a Russian Su-24 strike aircraft in 2015, both countries have otherwise managed to avoid coming to blows.

Yet Turkey has an estimated 7,000 troops in northern Syria, backed by drones and aircraft. Russian aircraft are supporting Syrian government troops attempting to wrest back Idlib – the last rebel-controlled territory in Syria. There are also Russian advisers and military police, and Russian mercenaries, in the area. It’s easy to envision multiple scenarios where Turkish and Russian forces engage in direct combat. For example, a Turkish attack on Syrian troops might injure Russian advisers, who call for air support from Russian planes. Or, Turkish aircraft accidentally shoot down Russian aircraft mistaken for Turkish planes, and then Russia might retaliate by downing Turkish jets.

While neither Moscow nor Ankara wants a direct fight, neither can afford to back down from a fight, Kofman says. “While both sides are working to avoid a conflict, neither side can accept loss of life without taking some kind of measures.”

Turkey and Russia have a troubled history, including a series of wars from the Seventeenth to the Twentieth Century (“those wars have not gone well for Turkey,” Kofman quips). But ironically, the Syrian flashpoint comes as Moscow and Ankara have drawn closer over recent years. Once the southern anchor of NATO against Soviet expansion, Turkey’s purchase of Russian S-400 anti-aircraft missiles angered the U.S. to the point that the Trump administration kicked Turkey out of the F-35 stealth fighter program.

The question is whether Turkey and Russia have irreconcilable goals, or merely differing goals that can be mutually satisfied. Turkish troops occupy northeastern Syria, ostensibly to create a buffer zone between Syrian Kurds who have formed a breakaway region from the Syrian government, and Turkish Kurds who have long battled the Turkish government in a bid for independence. Turkey would also like to see the demise of Syrian president Bashar al-Assad’s regime, not least because the Syrian offensive in Idlib has driven nearly a million refugees toward the Turkish border.

For its part, Russia is determined to preserve the Syrian regime. Moscow and Damascus have been allies since the 1960s, and Moscow's only naval base outside Russia is the Syrian port of Tartus.  Determined to stop Syrian rebels who came close to overthrowing the government, Moscow committed Russian planes that – along with troops from Iran and Iran’s Lebanese proxy Hezbollah – were instrumental in enabling the battered Syrian army to recapture most of the country.

However, experts believe that any cease-fire agreement in Idlib will be temporary at best. “Ultimately, the Russians will back the Syrian government’s desire to reclaim those territories,” predicts Bulent Aliriza, director of the Turkey Project at the Center for Strategic and International Studies in Washington, D.C. “But in the meanwhile, Putin is happy to kick that can down the road while Syria swallows and digests territory which the opposition had controlled.”

Michael Peck is a contributing writer for the National Interest, and a Writing Fellow at the Middle East Forum. He can be found on Twitter, Facebook. or his  Web site. This article first appeared in March 2020 and is being republished due to reader interest.