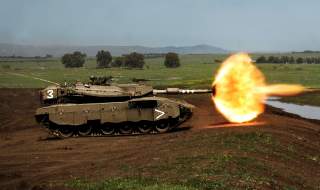 Did an Islamic Jihad drone drop a bomb an Israeli tank outside Gaza?