Does the Whistleblower Complaint Say What They Say It Does? 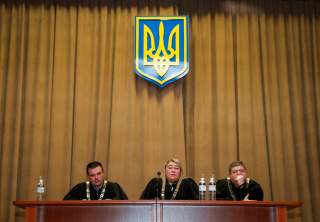 A whistleblower in the Trump administration accused President Donald Trump of seeking the help of Ukraine’s president in the 2020 election, according to a complaint that the House Intelligence Community released Thursday.

The complaint, which was filed on Aug. 12, focuses on a now-infamous July 25 phone call between Trump and Ukrainian President Volodymyr Zelensky. The whistleblower, who is not identified, also aired concerns about Trump lawyer Rudy Giuliani requests to Ukrainian officials to help him dig up dirt on Joe Biden and his son, Hunter.

The nine-page complaint also lays out concerns about how the White House handled a transcript of Trump’s call with Zelensky, saying that officials removed it from the computer systems were transcripts of conversations with foreign leaders are typically kept.

The whistleblower acknowledged that they were “not a direct witness to most of the events described” in the complaint. Instead, they picked up second-hand information from multiple White House and intelligence community officials. The person also had an “arguable political bias” towards one of Trump’s political opponents, the Intelligence Community Inspector General found.

The White House released the transcript of the Trump-Zelensky call on Wednesday, amid pressure from Democrats who have ramped up their calls for impeaching Trump during the whistleblower saga.

The transcript shows that after Trump congratulated Zelensky on his election win in May, the pair began discussing U.S. aid to Ukraine. Zelensky thanked Trump for U.S. assistance, and later mentioned that members of his administration had been in contact with Rudy Giuliani, a Trump lawyer who has tried to dig up dirt on Joe Biden and his son, Hunter.

Later in the conversation, Trump asked Zelensky for a “favor” by investigating whether he could investigate whether Ukraine had the DNC computer servers that were hacked in 2016.

Trump later brought up the Bidens, and cited Giuliani’s allegations that Joe Biden had intervened to help his son avoid prosecution in Ukraine when he was vice president.

Trump and other Republicans defended the call on Wednesday, and denied that there was any request for a quid pro quo. Trump also denied pressuring Zelensky to investigate Biden. Zelensky, who met with Trump at the UN General Assembly, also said that he did not feel pressure during the call to investigate Biden.

But the whistleblower — and many Democrats — hold a different view. Democrats have alleged that the call shows that Trump used his leverage as leader of the United States to exert pressure on a smaller European country.

The whistleblower said that after Trump’s call with Zelensky, multiple White House officials expressed concern that Trump had improperly advanced his personal interests in pressuring Zelensky to investigate the Bidens.

The whistleblower also accuses the White House of trying to cover up the call transcript by removing it from the computer system that normally houses those documents. The whistleblower asserted that it was part of an effort to “lock down” the transcript, to limit the number of officials who could view and potentially leak it.

The complaint also focuses heavily on the actions of Giuliani, who met with Ukrainian officials and U.S. State Department officials in his quest for Biden dirt.

Giuliani insists that when he was vice president, Biden forced Petro Poroshenko, the former Ukrainian president, to fire a prosecutor who was investigating Burisma Holdings, a natural gas company that had Hunter Biden as a board member.

The whistleblower says that there was no evidence that Burisma Holdings was under investigation, or that Joe Biden was aware of an investigation into the firm.

The complaint has spilled out into public view because of a bureaucratic fight between the Intelligence Community Inspector General, Office of the Director of National Intelligence, the Justice Department, and Congress.

Intelligence Community Inspector General Michael Atkinson deemed the complaint “credible” and “urgent,” and sent it to ODNI for release to the House and Senate Intelligence Committees.

But because the complaint dealt with Trump, Acting director of national intelligence Joseph Maguire consulted with the Justice Department on whether it should be given to lawmakers.

The Justice Department’s Office of Legal Counsel determined that the document did not meet the “urgent” concern requirement, meaning that the complaint did not have to be given to Congress. Rep. Adam Schiff, the chairman of the House Intelligence panel, intervened, and demanded access to the document.

The White House did not appear likely to release any of the information until this week, when a series of leaks to the press about the complaint increased calls for impeaching Trump. But the document was provided to the congressional intelligence committees on Wednesday, and declassified overnight.