Dolly Parton Is Back: Why This Country Superstar Is Bigger Than Ever 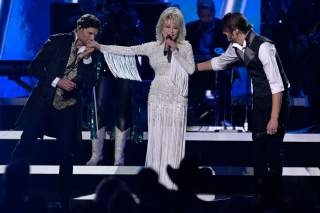 “We’re on great terms now.” This is how bluegrass performer Justin Hiltner describes his contemporary relationship with his family. In an interview on the hit WNYC podcast, Dolly Parton’s America, in episode No. 6 Hiltner tells podcast listeners he has achieved acceptance from his family.

Yet his story is replete with “minority stress,” those additional forms of stress that minority groups (including queer people) are exposed to — bullying, discrimination, exclusion, rejection. Hiltner explains how his parents prohibited him from leaving the house after he came out to them.

The stress became so severe that Hiltner ran away in the middle of the night. Eventually he landed in Nashville, Tenn., where he pursued a professional career in banjo-playing and songwriting. But he carries with him a feeling of ambivalence about going home again.

Hiltner’s story resonates with Parton’s story as well as with my own journey. Hiltner and I both grew up in small Ohio towns, and in socially conservative, religious families who were taught by Christian institutions that homosexuality was incompatible with a respectable Christian life.

I heard Hiltner’s story because Dolly Parton is having a popular cultural moment. Besides the hit podcast hosted by Jad Abumrad, Parton features in a recent Netflix anthology, a stage musical and a hit Swedish electronic dance song.

I grew up with Parton’s music and I associate her with what is described, endearingly, by Parton in the seventh episode as “hillbilly.” But her fanbase has grown from hillbillies to millennials who are broadly inclusive in regards to race, gender, gender identity and sexual orientation.

But as revealed in the interview with Abumrad’s father and throughout the series, the Parton moment has meaning for so many. Perhaps Hiltner’s story can help explain why Parton’s music has such broad appeal, across lines of race, nationality, gender identity and sexual orientation.

In the third episode of Dolly Parton’s America, Abumrad shares a reflection from his immigrant Lebanese-American father who is friends with Parton. He is trying to explain why the two of them bonded so quickly and what they had in common. Parton’s music is immigrant music, Abumrad’s father says. Her music resonates for those of us who have struggled to never quite feel like we’re at home.

Whether we migrate to flee the wars and hostilities of our nation or those of our parental home, migration means leaving something behind — sometimes for long periods of time, sometimes forever.

When I heard Hiltner’s story, and Parton’s affirmation, I thought of the paradox that queer people in North America and other societies face. We have seen legal and social advances with regard to our position as minority groups, but despite significant gains in gay rights, queer people still consistently feel the need to leave home before finding acceptance.

Migration is effectively a rite of passage for queer people. In the seminal 1995 piece “Get Thee to a Big City,” University of Virginia anthropologist Kath Weston poignantly described a “great gay migration” that occurred en masse after the Second World War to queer magnets like San Francisco, Toronto and New York.

The queer journey — away from “home,” toward something unknown — is also metaphorical, corresponding to our journey through the life course. Many queer people have life milestones that simply look different from our heterosexual counterparts. And so, the arc of a life defined by marriage and children doesn’t apply as consistently as it does for straight people.

The ending is more uncertain: for example, who will take care of us at the ends of our lives?. Thus, there is the potential for more despair, but also for more invention and creativity.

Spatial migration continues to have particular meaning for queer people, but the nature of this migration is shifting. University of British Columbia sociologist Amin Ghaziani has noted, there is no singular prediction of how and where queer people will spatially scatter. Ghaziani writes about the recent phenomenon of “cultural archipelagos”: newly formed spatial clusters of queer people outside the traditional gayborhoods. These are places like Columbus, Ohio, in my home state, and New Westminster, B.C.,, a suburb immediately to the east of my current home in Vancouver.

Hiltner introduced listeners to the term “metronormativity,” the notion that queerness is somehow linked by definition with a particular type of coastal-metropolitan-urban living. This concept is especially relevant for Hiltner and other southern queers, given that queer lives are now flourishing in many locales beyond San Francisco.

Taking these two observations in tandem — cultural archipelagos and metronormativity — I suppose a more fitting aphorism for contemporary queer life is that queerness means leaving “home,” wherever one goes.

The social acceptance paradox extends to the health of queer people. Researchers have described this as a “developmental collision” in the case of adolescents.

On the surface, improvement in the social status of queer people is a positive development. But this improvement is also associated with increased visibility for queer people, which may explain why we face higher rates of various threats to our health, including conversion therapy and suicide.

This is the crux of the paradox. The love of our families too often comes too late in life. And this may be why we haven’t seen a narrowing in queer health disparities that we hoped would have accompanied the profound advances in queer rights in recent decades.

For me, coming “home” is a fraught concept.

The love of Dolly and the growing support of middle Americans helps to alleviate some of the stress, but it is hard to imagine my life without having left home. Hiltner explained it well in a Skype call we had when I tried to sort through these reflections, both personal and academic:

“I think that the rite of passage — the movement bit of it, for queer people — will always be there … I think we’re all on a journey somewhere. And I think that’s why I want to listen to Dolly every day for the rest of my life. Because even after all she’s accomplished, and the countless miles she’s travelled in life, in music, in business, she somehow is still looking ahead … she’s on her journey too, and she has not arrived yet.”