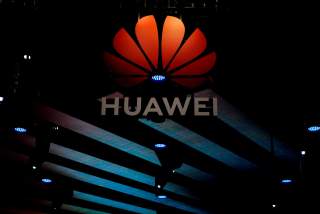 Anyone concerned with protecting our wireless communications systems from state-sponsored Chinese surveillance should take note of several important, and troubling, developments.

Both Huawei and the Chinese government are working furiously to integrate Huawei’s proprietary technology into emerging 5G networks throughout the world.

Their efforts are a business model and an intel-gathering strategy. This activity poses serious security risks for America and its allies.

Six former top Pentagon leaders, including former Director of National Intelligence James Clapper, earlier this month warned of “near persistent data transfer back to China” if the U.S. were to incorporate Huawei or other Chinese telecom equipment in our 5G networks.

This warning parallels the one given a few years ago to British businesses by the then head of the security agency MI5, that every major business in the U.K. was being surveilled by China. Thankfully, it seems unlikely that a U.S.-based 5G network incorporating Huawei tech will become a reality.

For years, Huawei worked to integrate its telecommunications equipment into the networks of countries across Europe and Africa–often offering its services at lower costs than its competitors. Today, Huawei’s proprietary equipment is integrated in 4G wireless networks throughout the world.

The equipment, available at below market cost (subsidized by the Chinese government), is the entry drug of choice into Huawei’s domain, and now large parts of the world are addicted and locked into Huawei.

This presents an enormous risk, as Huawei’s 4G equipment does not interoperate with another vendor’s equipment. Meaning that for now, if you chose Huawei to build your 4G network, then your only choice for 5G is Huawei.

The security concerns associated with Huawei are clear and well documented, and while an outright ban may not be feasible, it’s long past time for our allies to consider their options and to act.

Among the many dangers cited by the generals, most concerning is China’s 2017 National Intelligence Law, which requires “any organization and citizen [to] support, provide assistance, and cooperate in national intelligence work.”

While the U.S. has worked tirelessly to sound public alarm, reactions around the world from our allies have been mixed.

Some of the laziness of their reaction could be because everyone already knew that the telecom giant and Chinese intel were in bed. Consider that China was willing to make this previously unspoken fact a public declaration; the Chinese don’t care because they are pretty sure no one can stop them.

Last summer, Australia announced that it would block Huawei and China’s ZTE Corp. from building its 5G networks. But last month, the European Union flinched. The EU stopped short of banning Huawei equipment in future networks.

While the EU acknowledged security concerns about Huawei, it put forth only a half-measure that requires EU nations to share data on 5G cybersecurity and suggest ways to thwart surveillance. This insufficient level of concern is one of the reasons the U.K. is willing to make a go of it outside the EU.

To understand the enormity of Chinese penetration of the wireless supply chain and the diverse ways Chinese officials are trying to accomplish this, just look at a recent Wall Street Journal report on Huawei’s short-lived coup to provide free Wi-Fi at the Washington Redskins’ home games.

Since these games are a magnet for members of Congress and high-ranking federal officials, the prospect that Huawei would regularly process sensitive mobile connections was seriously unnerving.

Fortunately, the deal unraveled after inquiries from a U.S. intelligence official.  It is a prime example of how unaware many people, even many decision-makers, are of the threat China poses.

Although this was a small win against Chinese state-sponsored surveillance, the bigger conflict unfortunately continues, and it has far higher stakes.

Think of it this way: Instead of a Chinese state-sponsored surveillance company handling mobile data at a sporting event once a week, the company could become a nation’s 24/7 provider. There would be no way to avoid it.

Huawei would be in a position to access emails, important files, and other data flowing through its hardware. Even though secure communications are encrypted, emerging quantum computing technology (in which China plays a leading role) eventually will break those codes instantly.

As Pentagon leaders note, the implications go far beyond stealing military and business secrets. Huawei represents a threat to basic democracy throughout the world. Our allies shouldn’t allow a repressive government with the capability of surveilling its citizens to manage their 5G networks.

Although it may seem clear that the U.S. is in a position to ban Huawei technology, our national security community now must prepare to address a reality that our European allies do not.

If a full ban is off the table, President Donald Trump and his administration must work with our allies using Huawei 4G technology to push for interoperability, ending the technology-induced monopoly addiction that Huawei has created. The threat is real, and it is here now.