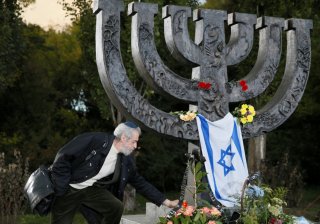 Holocaust distortion is a stain on the otherwise charming nation of Ukraine. Ukrainians and their Western allies should admit this fact and plainly condemn arrogant nationalist attempts to rewrite World War II history.

But since the 2000s, glorification of such local Nazi henchmen has become a trend in Eastern Europe, where the Holocaust by Bullets killed 1.5 million Jews before any death camps even began operation. Now in today’s Ukraine, the core dispute is over which narrative will prevail—consensus history or a rewritten version.

Modern Ukrainian nationalists are trying to revise the historical narrative at Kyiv’s new Babyn Yar Holocaust Memorial Center (BYHMC). They object to the fact that the museum is partially funded by Russian businessmen Pavel Fuchs, Mikhail Fridman, and Herman Khan, some of whom have been designated as “oligarchs” close to Russian president Vladimir Putin. They have raised fears that the museum would be instrumentalized as a form of “hybrid war” against Ukraine and have demanded that the project either reject its “Russian footprint“ or be abandoned. However, it is feared that the absence of those private foreign funds would likely kill the initiative entirely.

State projects at Babyn Yar have failed since 2003, leading to speculation that this is due to active efforts to kill the project. Brian O’Toole, an expert at the Atlantic Council, told RFE/RL that sanctions against the project’s sponsors would “preclude cooperation with American museums, such as the Washington Holocaust Museum” because U.S. agencies and citizens are barred from cooperating with sanctioned individuals. In this context, sanctions could even be manipulated as part of an effort to kill the allegedly “anti-Ukrainian” BYHMC narrative."

So, what could be so damaging about the Babyn Yar massacre narrative that America’s closest Ukrainian civil society allies are willing to risk their reputations and fly in the face of reason to oppose it? Is it worth derailing the entire project simply because some of Putin’s cronies support it financially?

The country is scandalized by its own history, as it is easier to dismiss uncomfortable truths as Russian propaganda or some special operation to accuse Ukraine of committing the Holocaust than to accept its tragic interethnic national legacy. Even reputable Ukrainian outlets publish such sentiments regularly—tone-deaf to how they sound in the West, where only Holocaust deniers deploy alternate facts to revise the consensus history of World War II.

The heirs to those Ukrainians who perpetrated the massacre at Babyn Yar assert the Holocaust was part of a “national liberation” to free “captive nations” from communism. They paint the Jews as communists who deserved their fate as a reprisal for the Holodomor (Stalin’s planned famine to starve and depopulate ethnic Ukrainian regions and then overrun them with Russian settlers), as one former high-ranking Ukrainian “liberal” recently told me.

How can anyone get away with such claims? It’s easier than one would think. Dismiss dissenting views as Russian propaganda, neutralize critics via reputational or career consequences, and get a few influential Jewish leaders to agree. To civilize this perversion of history, East European nationalists invoke historian Timothy Snyder’s “double genocide” theory—used to equate Soviet liberators of the death camps with those same camps’ Nazi creators.

Echoing this, Ukrainian nationalists speculate that the controversial BYHMC is part of Russia’s hybrid war against Ukraine—a Ukrainophobic plot funded by rich Russians of Ukrainian-Jewish heritage. In so doing, this alternately derives from the conspiracy theory that led to the Holocaust: Judeo-Bolshevism—itself a core part of the anti-Semitic conspiracy alleging that a cabal of Jewish puppet masters secretly dictates world events.

Perhaps instead of viewing the situation as a conspiracy, it could just be a matter of wealthy Jewish philanthropists wishing to memorialize dead ancestors murdered there. It’s not difficult to believe, considering that eighty years later there is still no substantial monument to Babyn Yar—even though it was the single worst mass shooting of the Holocaust.

Ukrainian-Jewish dissident Yosyf Zisels embodies the opposition to the museum’s narrative. He calls the BYHMC “a Russian Trojan horse to show the world Ukrainians are fascists,” arguing that: “This narrative creates a picture of the Holocaust centered on Babyn Yar. The question is – is Ukraine, which was not a state at the time, the center of the Holocaust instead of Nazi Germany?”

While this may be a valid point, such questions were once limited to Holocaust deniers. Now they are being posed a leader of the Ukrainian-Jewish community. This is especially alarming in a country like Ukraine, where evidence shows the far Right is gaining disturbing influence—with (or more likely without) voter support.

In 2020, Israel’s Foreign Ministry even issued an unprecedented statement on Holocaust Remembrance Day, condemning “the public glorification of antisemitic ideologists in Ukraine and individuals responsible for the murder of Jews.” Western liberals and experts should know better than to lobby on behalf of nationalists whitewashing history.

Opposition to the new Babyn Yar memorial will help ruin Ukraine’s already beleaguered international reputation. Indifference to rampant historical revisionism may not seem like Holocaust denial to Ukrainians, but it will to the Western mainstream. History makes it disingenuous and indecent to claim that the BYHMC is a disinformation operation to position Ukraine at the center of the Holocaust—because at least geographically, it was.

Similar narratives haunt the Baltic countries too. They were early pioneers of the “double genocide“ theory which rationalizes the Holocaust as retaliation for “Judeo-Bolshevik” crimes during Eastern Europe’s first communist occupation.

This language has now wormed its way into multilateral agreements too. The 2008 Prague Declaration on European Conscience and Communism and the 2009 OSCE Vilnius Declaration to condemn totalitarianism both equate the Nazi Final Solution with Soviet terror. Simon Wiesenthal Center Jerusalem office director Efraim Zuroff, perhaps the world’s last real Nazi hunter, notes that this is a false equivalence saying: “You can’t compare the people who built Auschwitz to those who liberated it.”

Nevertheless, Balts and Ukrainians have spent decades doing just that—trying to convince Western anti-communists that consensus history is wrong and that no locals volunteered to aid the Nazis in perpetrating mass killings. They say it’s all Russian lies spread to discredit the now-sovereign ex-Soviet republics where the Holocaust happened.

And that’s significant—because today out in rural western Ukraine, little remains to show that there ever even was a Holocaust. Now a scenic tourist destination, the city of Kamianets-Podilskyi hosted the largest Nazi mass shooting before Babyn Yar. But on that 2017 observance, apart from the crumbling cemetery and a periodically defaced memorial, the only visible sign of its erased Jewish community was some Star of David graffiti spray-painted on a trashcan outside what was once the synagogue.

Ukraine’s ethnically Jewish president and former prime minister may buffer the country against charges of anti-Semitism, but this position is weakened by pretending that Nazi collaborators were actually freedom fighters who somehow played a positive role in the Holocaust—the BYHMC dispute’s core controversy.

Ukrainians can close this corrosive information warfare vulnerability at Babyn Yar by gracefully accepting consensus history about the Holocaust. Admitting the facts is a good way to prevent their weaponization by a hostile Russia—trying to debunk the truth is not.

Jonathan Brunson is a specialist in political, information, and history warfare. Slate, Newsweek, and the Daily Beast have published his writing on Russian hybrid war and the Ukrainian far-right.