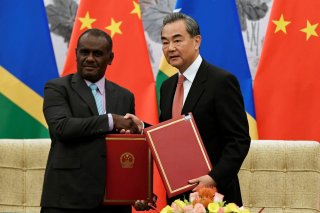 In an op-ed published on Wednesday, Xiao Qian, China’s ambassador to Australia, urged Australians not to overreact to Beijing’s security partnership with the Solomon Islands—even as the issue has become a hotly contested topic in Australia’s parliament, which faces an election next week.

The op-ed, published in the Australian Financial Review, insisted that China sought closer ties with Australia and would not seek to jeopardize its security position in the Indo-Pacific.

“The cooperation between China and the South Pacific island countries is conducive to people’s wellbeing on both sides, and regional prosperity and stability, and will by no means threaten Australia’s security,” Xiao wrote. “China’s rise should not be seen as a threat to Australia.”

The op-ed made no specific reference to the Solomon Islands, despite expectations of a high-level visit by a Chinese delegation in the coming weeks. It is unclear whether the “security partnership” will lead to a military base on the island, although both China and the Solomon Islands have denied this.

However, the issue has caused concern in Australia, where the government of Prime Minister Scott Morrison of the center-right Liberal Party has condemned the pact.

“That’s why I’ve always taken a very strong stance upon this,” he added.

Leaders in Australia’s center-left Labor Party have also condemned the pact, with leader Anthony Albanese arguing that it showed that China had become “more aggressive in the region.” On the campaign trail, Albanese has also blamed the Morrison government for allowing the pact to happen, arguing that its negotiation in the first place showed weakness in the prime minister’s foreign policy.

The Solomon Islands are located roughly 1,200 miles, or 2,000 kilometers, to Australia’s northeast, off the eastern coast of Papua New Guinea. Both Australia and the United States—tied to Australia in the Quad and AUKUS security pacts—have expressed concerns over a potential militarization of the islands. However, they have agreed that China and the Solomon Islands both have a sovereign right to engage in their own bilateral relations.

It has been reported that Chinese foreign minister Wang Yi intends to visit the islands as soon as next week, although the Chinese Foreign Ministry has not confirmed this.