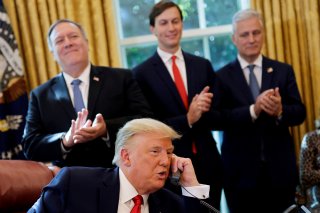 Israelis have a slang word for the mindset that takes hold during the twilight of an endeavor when the light is already visible at the end of the tunnel. Asak—a Hebrew acronym that translates into “end-of-course atmosphere”—is used most typically to describe the mellow lethargy which accompanies the final days before graduation from military training.

But as the tumultuous boot camp of the 2020 presidential campaign winds down, the prevailing asak couldn’t be any less relaxed or carefree. And the whole world is getting in on the action.

With most polls forecasting the imminent demise of the Trump administration, the global marketplace is frenetic. International leaders are lining up to cut last-second bargains with a highly transactional President Donald Trump, a man who fancies himself as a virtuoso dealmaker. Rivals and allies alike are stepping up to the U.S. plate, hungry to consolidate previous gains or to cash-in outstanding options. The results could easily blow up in everyone’s face.

A dismal campaign for re-election, during which Trump has struggled famously to articulate any coherent agenda for a second term, and an uninspiring response to the coronavirus pandemic have encouraged the incumbent president to seek his fortunes abroad. His hopes of bagging a Nobel Peace Prize may have been disappointed—his press secretary, Kayleigh McEnany, told reporters in September that his nomination for the award was “very well deserved”—but recent pursuits of Trump’s envoys suggest that he has not despaired of diplomatic prestige as a potential path to victory in November.

The danger is clear: desperation is a recipe for shoddy statesmanship. Some of Trump’s interlocutors, keenly aware of how eager he is to win the upcoming ballot, are now turning his political predicament to their advantage, exacting precious concessions that were denied to them previously. The United States and its national interests couldn’t be in a more vulnerable position.

This has been most palpable in the Middle East, where the United States has shepherded a series of agreements between Israel and its erstwhile enemies. Trump’s peace emissaries have crisscrossed the region relentlessly. Promoting peace and reconciliation is always a worthy venture—and the administration deserves to be praised for undertaking it—but serious doubts are being raised this time about its ominous price tag.

Celebrations surrounding the implementation of the Abraham Accords between Israel, the United Arab Emirates, Bahrain, and the United States have been marred by the specter of an impending arms race set in motion by President Trump.

The parties had long been moving toward full normalization of their relations, but timing is everything. Withholding their consent to sign on the bottom line until Trump was primed to pay top dollar, the Emiratis were able finally to score once-elusive U.S. approval for them to procure sophisticated F-35 stealth jets. Trump’s craving for a win—including a posh White House ceremony and a hefty payout for American defense contractors—fed his disregard for bipartisan pushback from Capitol Hill, amid concerns that the sale of top-shelf weapons to Israel’s Arab neighbors could erode the U.S. commitment to its Qualitative Military Edge. (Prime Minister Benjamin Netanyahu’s willingness to rush the process through, keeping Israel’s most senior defense officials in the dark, can be attributed likewise to his precarious circumstances and need for positive headlines).

With the floodgates now open, the proliferation of lethal F-35 platforms is virtually a fait accompli. Israel’s energy minister, Yuval Steinitz, said on Oct. 25 that Saudi Arabia and Qatar—upon which Trump is preparing to bestow Major Non-NATO Ally status—will surely become entitled to take delivery of the F-35 if they desire; his words sparked a wave of concern that Trump and Netanyahu may already be considering just such a package for latecomers to the party. A multitude of advanced fighter planes in a theater that remains on a constant war footing, with Iran in striking range of a nuclear breakout capacity, could well ignite a powder keg that engulfs the international community.

Progress between Israel and Sudan bears the same imprimatur of a jittery White House with no time left to cross its “T”s and dot its “I”s. Trump raced to announce on Oct. 23 that the two countries have “agreed to make peace”—in return, apparently, for Sudan being removed from the State Department’s list of terrorism sponsors and gaining access to debt relief and other financial aid—but their understandings are half-baked. Resolving at this stage only to embark on a course toward establishing ties, Israel and Sudan still have a great distance to travel before full mutual recognition. The fragile domestic situation in Sudan provides little assurance that peace is a foregone conclusion, but Trump, in his zeal to broadcast success, tabled an offer that—by the candid admission of Khartoum’s ruler—was simply too good for Sudan to refuse.

The menace of an untethered Trump foreign policy in the service of politics extends to other parts of the planet as well. It may not subside after Election Day either, when he will pounce certainly to cement his legacy or, alternatively, thumb his nose at his detractors.

Trump’s renegotiation of the START arms control treaty with Russia—where verification has become a major stumbling block—could end in failure with President Vladimir Putin seizing the upper hand over a U.S. president who is anxious to put his stamp on the pact. His belligerent rhetoric against China for “letting” coronavirus spread beyond its borders could escalate easily into open confrontation. And his rebuffed overtures to Iran might suddenly draw the interest of Iranian leaders who could benefit from the opportunity to afford bragging rights for a new breakthrough, as it were, to an impulsive and agitated Trump.

A contested ballot which brings enraged Americans into the streets would be a blow for world stability. The fallout from a rotten deal would make it pale in comparison, and leave a hot potato for Trump’s successor to handle.

Shalom Lipner is a nonresident senior fellow for Middle East programs at the Atlantic Council. From 1990 to 2016, he served seven consecutive premiers at the Prime Minister’s Office in Jerusalem. Follow him on Twitter @ShalomLipner.