Donald Trump Is Changing How Americans Think About Everything 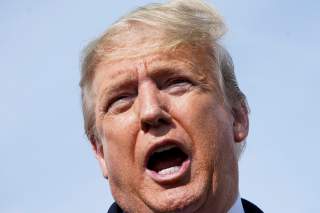 During America’s health care debate in 2013, late-night comedian Jimmy Kimmel got some laughs when he asked people whether they supported Obamacare or the Affordable Care Act. Both names refer to the exact same legislation.

Now, a new poll demonstrates that voters are more than willing to change their previously stated positions after learning where President Donald Trump stands on the issue.

After a U.S. drone strike killed Qasem Solemani and Iran retaliated against a U.S. base in Iraq, a Yahoo News/YouGov poll surveyed 1,500 people about their views on U.S. policy toward Iran.

Participants were asked whether they supported the current policy, which was that the U.S. would take no additional military action against Iran, according to Yahoo News’ Andrew Romano. While 70% of Democrats agreed, only 37% of Republicans concurred.

Those surveyed were then told that the policy of refraining from additional military action was Donald Trump’s decision.

Support for the policy of restraint fell among Democrats to 58%, but jumped to 81% among Republicans once they learned it was what Trump wanted.

Research shows that voters adopt positions and perceptions based in part upon the politicians they support.

But this Yahoo News/YouGov poll shows something even more unusual. Respondents changed positions that were once consistent with their party or ideology according to Trump’s preferences – even when doing so contradicted their usual views.

At first, it appeared that most Republicans originally wanted a military response, but Republican respondents were more likely to go with a less aggressive response when it was framed as Trump’s position.

In recent years, voters have shifted their views on issues based upon the positions of other presidents.

A Gallup study on George W. Bush’s Social Security privatization proposals found evidence that “suggests that public opinion on Social Security could devolve into nothing more than a referendum on the president,” rather than support for one’s policy preferences.

Like Kimmel, CNBC asked a group of 812 voters how they felt about Obamacare, as well as the Affordable Care Act, or ACA, in 2013. Thirty-five percent of voters rated Obamacare strongly negative, compared to 24% who said the same about the ACA.

“People liked the Affordable Care Act and a lot of what was in it. They just didn’t like the Obama part of ObamaCare, the fact that he was branded with it,” said Dan Cox, former research director at the Public Religion Research Institute, in an interview with The Hill. But as Obama improved in popularity, so too did Obamacare, as the two became intertwined.

In a 2018 study, political scientists Andrew Gooch and Gregory A. Huber discovered that even with today’s hyperpartisanship, voters still prefer particular candidates’ positions, even if those contradict the traditional party line.

Despite claiming loyalty to party labels, voters sometimes go for what candidates say, and not for predictable ideologies or party platforms. That gives a lot of power to particular politicians over party members and ideological supporters.

John A. Tures, Professor of Political Science, LaGrange College This article is republished from The Conversation under a Creative Commons license. Read the original article.