Donald Trump Has an Ethanol Problem 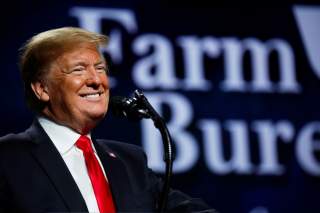 President Donald Trump often boasts that U.S. farmers are on his side, but a tweet Thursday indicates he recognizes the need for more damage control. What’s unclear is if his new promises will even begin to mitigate the harm he’s already done to farmers’ income.

“The Farmers are going to be so happy when they see what we are doing for Ethanol,” Trump insisted. “It will be a giant package, get ready!” He boasted that he’s also been able “to save the small refineries from certain closing.”

The tweet follows numerous decisions by the Trump administration that have dramatically hurt farmers. Not only have farmers faced the consequences of the tariffs in Trump’s trade war with China, but his administration also announced this month a new round of waivers for oil refineries to not have to include ethanol in their production.

The Renewable Fuel Standard requires that oil refineries blend biofuels like ethanol into their fuel. As a result, 40% of corn grown in the United States is turned into ethanol. Since taking office, however, the Environmental Protection Agency (EPA) has been issuing waivers to to small oil refineries relieving them of this ethanol requirement. Prior to this month, it had issued 54 such waivers, and it has just issued another 31.

As a result, demand for ethanol has plummeted by an estimated 2.6 billion gallons. And the EPA has so far decided not to raise the annual target for how much corn ethanol will be blended into gasoline, meaning the demand won’t change. The oil industry, unsurprisingly, opposes any efforts to bolster ethanol.

The waivers have been great for oil refineries, but terrible for ethanol refineries, which have also suffered from the reduced demand. Since Trump’s EPA started issuing the waivers, 16 ethanol plants have shut down or idled, including one in Minnesota just this week and one in Indiana last week. That’s resulted in a loss of more than 2,500 jobs.

Whatever Trump proposes in this new “giant package” will have to compensate for all of these losses — on top of damage that’s already been done by the trade war tariffs. In an interview with MSNBC shortly after Trump posted his tweet Thursday, Roger Johnson of the National Farmers Union highlighted just how little the president’s subsidies will compensate for farmers’ losses.

“Net farm income’s been down in the area of $600 billion dollars,” Johnson explained. “And so these payments, $12 billion, $16 billion — yes, they’re needed, they’re important, but they’re not going to make up for the damage and this damage is long-term. It’s going to be decades — literally — before we get some of these markets back, if ever.”

Zack Ford covers the Trump administration. In addition to daily political news, he has also covered issues related to marriage equality, transgender rights, education, and "religious freedom." In 2014, The Advocate named Zack one of its "40 under 40" in LGBT media, describing him as "one of the most influential journalists online." He has a passion for education, having received a Bachelor's in Music Education at Ithaca College and a Master's in Higher Education at Iowa State University, and he relishes opportunities to return to classroom settings to discuss social justice issues with students. He can be reached at [email protected].

This story originally appeared in ThinkProgress.