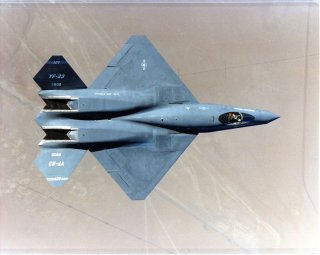 In January 2018 during a speech at the White House alongside Norwegian Prime Minister Erna Solberg, former U.S. President Donald Trump spoke to gathered members of the media about the growing defense relationship between the United States and Norway. According to the former President, the United States had begun delivery of both F-35 and F-52 fighter aircraft to Norway, telling those in attendance that “we have a total of 52 and they’ve delivered a number of them already a little ahead of schedule.”

While the United States had indeed begun to deliver some advanced military aircraft to its Norwegian NATO ally, there was only one problem with the former President’s speech: the F-52 is not a real aircraft.

Trump, who was often known to go off script or to avoid using a teleprompter altogether, may have simply jumbled together with the figure of 52 with the “F” designation that is given to fighter aircraft in the U.S. military while reading a prepared speech. But in further defense of the former President, the F-52 is not an entirely made-up aircraft, and it does exist – but only in a fictional video game universe.

The F-52 is featured in a single-player campaign mission in 2014’s “Call of Duty: Advanced Warfare,” during which players fly the aircraft through a ravine while attacking targets with an array of weaponry.

The F-52 in the game may have itself been based on an aircraft design that did exist in the real world, though on one that never made it into production

In the 1980s, the United States Air Force kicked off its Advanced Tactical Fighter Program in an effort to begin the development of a next-generation fighter aircraft that could serve as a counter to the emerging threat presented by advanced Soviet fighters such as the MiG-29 and the SU-27. Two prototype fighters were developed and selected as finalists for the competition: Lockheed Martin’s YF-22 and Northrop’s YF-23. A final competition was held in the early 1990s to determine the final design of the Air Force’s future air superiority fighter, and while the YF-23 was in some ways superior to the YF-22 – offering both improved range and stealth capabilities – the YF-22 was eventually selected as the winner.

Despite the YF-23’s advantages, the Air Force proceeded with its competitor because of Lockheed’s much better sales job and because the Air Force believed that Lockheed would prove to be more successful at managing the program.

The YF-22 would go on to become the Air Force’s fifth-generation F-22 Raptor, but it also nearly spawned a naval variant. Following the emergence of the F-22, Congress pushed the Navy to consider adopting a variant of the Air Force’s new fighter as part of its Naval Advanced Tactical Fighter Program as a potentially lower-cost option than developing its own entirely new carrier-based fighter. The Air Force, meanwhile, was then encouraged to adopt a variant of the Navy’s planned carrier-based stealth bomber.

In theory, this arrangement would have allowed each service to make use of the other’s existing research and development (R&D) efforts in order to avoid the costs of carrying out R&D of two entirely new aircraft designs. This type of multi-service cost-sharing arrangement may have been the early origin of the later F-35 Joint Strike Fighter program.

The pursuit of a naval variant of the YF-22 never really took off, however, and was deemed to be too expensive. The aircraft would have reportedly made use of a sweep-wing design similar to that of the Navy’s existing F-14s, which would have not only compromised the aircraft’s stealth capabilities but would also have resulted in high maintenance costs. The development of a naval variant of the YF-22 would also have required significant modifications to the aircraft’s existing design in order to allow it to operate on board carriers.

While a Navy version of what ultimately became the F-22 Raptor never materialized, the unique design for the theoretical aircraft did serve as the inspiration for the fictional F-52 that, as of now, still has not been developed for export to Norway.

The United States has, however, begun delivering F-35s to Norway. At the time of Trump’s speech, the U.S. had delivered 10 out of a planned 40 Norwegian F-35s. Norway is one of the eight original international partners in the F-35 program.