Donald Trump Must Go Big To Save the U.S. Economy from a Disaster 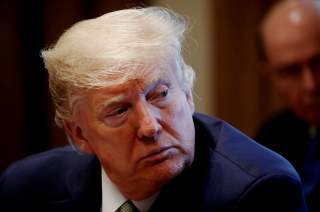 At a time of a global economic and financial market crisis, engaging in wishful thinking and partisan politics is hardly a prudent economic strategy. Yet that is what the Trump Administration seems to be doing by only grudgingly recognizing that the U.S. economy is now heading for a recession and by insisting on a my way or the highway approach to supporting the economy.

Failure to recognize the severity of the country’s economic challenges and failure to build bipartisan support for swift and bold fiscal policy action heightens the likelihood that we could get a repeat of the 2008-2009 Great Economic Recession.

Up until now, President Trump has not tired of reminding the public in the most partisan of manners that the U.S. economy is strong and the envy of the world. He has kept doing so despite the fact that the U.S. stock market has now lost around one third of its value. He has also done so despite signs of building credit market stress and dark storm clouds gathering over the rest of the world economy.

Part of the reason for deep concern about the U.S. and global economic outlooks is that seldom before has the world economy been hit by a supply-side shock that has known no boundaries of the severity of the coronavirus epidemic.

By now literally, tens of millions of workers have already been locked down in China, Italy, Japan, and Spain, which is causing these economies to grinding to a virtual halt. Workers are now also starting to be locked down even in the United States and the rest of Europe. Meanwhile, global supply chains have been disrupted and both local and international travel systems have been upended.

All of this would have been sufficient cause for concern had it been occurring at a time of global economic strength and balanced financial markets. However, that is far from what has happened. The coronavirus has hit precisely at a time that a full 90 percent of the world’s economies were experiencing economic slowdowns. It has also hit at a time that U.S. equity valuations were at lofty levels experienced only three times in the last one hundred years and at a time that US and global credit markets were grossly mispricing the risk of corporate default.

At this stage it should be clear that the coronavirus epidemic has punctured the global equity market bubble, set off an abrupt repricing of credit that could result in a global credit crunch, and given rise to the massive repatriation of capital flows from the emerging market economies. In the process, it has wiped out around U.S.$ 9 trillion in U.S. household wealth and led to a marked rise in corporate borrowing costs.

All of this makes it fanciful to think that, absent bold economic policy action, the U.S. and world economies are in for a V-shaped recovery once the coronavirus epidemic starts to ebb.

An all too likely synchronized world economic recession, coupled with a global equity and credit market meltdown, would seem to call for the boldest and most coordinated of economic policy measures.

As an indication of the size of the package of fiscal support that the US economy alone might need, it is instructive to consider that according to the Federal Reserve’s economic model, if sustained the decline in U.S. equity prices to date could shave almost 2 percent from US GDP. Add to that the economic damage that a credit crunch is now causing and we are talking about the need for a fiscal package very much larger than the U.S.$850 billion package that the Administration is now proposing.

It is encouraging at least that the Administration now has a fiscal package on the table. However, it is questionable whether this package is of a sufficient size or whether it has the bipartisan support it needs to get through Congress. It is also disappointing that the U.S. is not providing the international economic leadership to coordinate policies to address what is clearly not simply a US but a global economic crisis.

In October 2008, it took a real meltdown in the U.S. equity market to forge a bipartisan consensus to get the Troubled Relief Asset Program (TARP) approved. Hopefully, this time around, politicians will put politics aside and swiftly approve a well-targeted fiscal support package of a sufficient size that might spare the country of a rerun of the 2008-2009 Great Economic Recession.