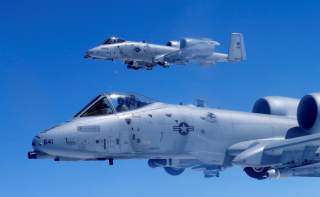 The U.S. Air Force (USAF) has to hold on to the A-10 Warthog attack aircraft President Trump told airmen in South Korea on Jun. 30, 2019.

As reported by Air Force Times, during his visit to Osan Air Base after his visit to the demilitarized zone between North and South Korea, Trump cheered plans in the Pentagon’s budget to buy 78 more F-35s, 24 new F/A-18s and eight F-15EX fighter jets, before pivoting to the Warthog.

“By the way, the Warthog right behind me is not so bad,” Trump said. “I’ve got more people asking us to keep the Warthog. They say it’s sort of running out, but we’re fixing up — you know, we’re going to keep them as long as we can.”

“But people love them. Are they that good?” Trump said to applause.

Trump also gave a hat tip to Sen. Martha McSally, R-Ariz., who flew A-10 Warthogs in the USAF and has consistently advocated for keeping the airplane.

“Every time I see her, she said, ‘Please don’t let the Warthog go,’” Trump said. “It’s just a very great machine, and we’re looking at ways that maybe we can keep it around a little bit longer.”

During the Obama administration, since it was bringing on board the F-35 fleet which required more people and resources the USAF repeatedly sought to mothball the A-10. The Pentagon ran into resistance on Capitol Hill, however, and the A-10 Warthogs stayed.

As already reported, last month full funding for A-10 Warthog upgrades next year — including re-winging them — passed the House Armed Services Committee with nary an objection.

Arizona Reps. Ruben Gallego and Ann Kirkpatrick applauded the A-10 funding in a statement.

“The A-10 Warthog has immeasurable value to our U.S. troops on the ground and plays a critical role in our military strategy in the Middle East and around the world,” Gallego said. “I’m glad that we were able to keep this fleet fully operational, and I will continue to fight to preserve this aircraft to ensure that the warfighter on the ground gets their air support.”

Gallego and Kirkpatrick noted that the Air Force said in 2017 that nearly half of its A-10 fleet, which consists of 283 aircraft, could be permanently grounded unless funding came through to restart production and re-wing them.

However, Trump also praised the F-35 for its stealth capabilities during his remarks at Osan.

“They say they’re hard to beat because you can’t see them, literally,” Trump said. “I’ve gone to some of the great pilots; I say, ‘What do you think of the F-35? How does the enemy do?’ ‘Well, they have a problem: They can’t see it, sir.’ I mean, that’s pretty much it, right? We’ve got a lot of them.”