Donald Trump Wants Billions for Missile Defense. Is That a Bad Idea? 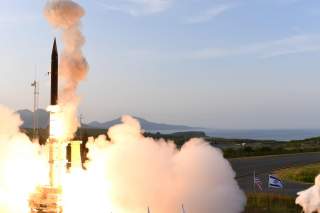 The White House’s fiscal year 2021 budget request released earlier this month asks Congress for $20.3 billion for missile defense and defeat programs. Nearly half of the request ($9.2 billion) is for the Missile Defense Agency (MDA). The rest of the money will go toward a mix of missile defense programs outside of MDA ($7.9 billion) and “left of launch” activities that attempt to disrupt or destroy enemy missiles before they can be fired ($3.2 billion). These request figures are more or less in line with requests from the past two years and should not be regarded as a major increase.

What makes the FY 21 missile defense budget request noteworthy isn’t the amount of money being asked for but the priorities it reveals. Namely, the MDA is focused on erasing the distinction between regional and homeland missile defense systems.

This is not a new line of effort. Greater integration among various missile defense systems is a longstanding policy goal that can now be realized thanks to technical improvements. However, if the MDA is successful the United States will have to wrestle with thorny questions about nuclear stability and the future of arms control.

Missile defense systems can be categorized according to which operational role they play. Regional or theater missile defense systems protect military units, installations, and civil infrastructure. The capabilities that the United States has traditionally used for this mission tend to be mobile and very reliable in testing. Homeland missile defense systems protect the continental United States from intercontinental‐​range ballistic missiles (ICBMs). Currently there is only one option for homeland defense, the Ground‐​based Midcourse Defense (GMD) system, which is both very expensive and notoriously unreliable.

Improvements in interceptor and sensor technology allow for new mission types that have started to blur the lines between this regional vs. homeland distinction. New interceptors can engage a wider range of threats than their predecessors. The most notable example of this is the SM‑3 IIA, the latest generation of the Standard Missile family, that MDA plans to test against an ICBM‐​range target in 2020.

Another benefit of improved sensors and data fusion is “engage‐​on‐​remote” or EOR, which is essentially an improved version of LOR. In EOR, remote sensors provide all necessary data to an interceptor, detecting launch, and tracking the target. The interceptor’s associated radar does not have to track the threat in an EOR scenario.

Taken together, new interceptors and sensors will allow capabilities previously used only for regional defense to contribute to homeland defense. The MDA’s FY 21 budget request calls for the SM‑3 IIA and THAAD systems to serve as an additional layer for homeland defense in case the GMD misses its mark. If these efforts are successful, the United States would be able to deploy many more interceptors capable of destroying ICBM‐​range warheads than it currently fields.

This could prompt offensive nuclear buildups to overwhelm a thicker U.S. homeland defense or early attacks against U.S. missile defense sensors that also provide early warning of nuclear strikes against the homeland. China and Russia already have a strong incentive to blind U.S. missile defense sensors in a conventional conflict. Stronger integration of regional and homeland missile defense capabilities will reinforce this incentive. Neither nuclear buildups nor blinding strikes are beneficial for America’s long‐​term interests.

Greater integration of regional and homeland missile defense capabilities will also make it harder for the United States to use missile defense limitations as a bargaining chip in arms control negotiations. Any future U.S.-Russia arms control agreement that reduces offensive weapons, regardless of whether New START is extended, is unlikely to succeed unless the United States is willing to put missile defense on the table. Yet deeper integration of capabilities makes it harder to limit any one system without negatively affecting others.

An expansion of defensive capabilities could make it easier for the United States to reduce its offensive nuclear forces in future arms control agreements. Stronger defenses would allow for U.S. offensive reductions without increasing vulnerability or risk. A lower requirement for offensive capabilities would also take some pressure off the U.S. nuclear enterprise, which is being stretched thin by the demands of the modernization program. However, such an outcome seems highly unlikely.

This article by Eric Gomez first appeared at CATO.

Image: Israel's U.S.-backed Arrow-3 ballistic missile shield is seen during a series of live interception tests over Alaska, U.S., in this handout picture obtained by Reuters on July 28, 2019. Courtesy Israel Ministry of Defense via REUTERS