Donald Trump Wants One Thing After Being Impeached: Vengeance 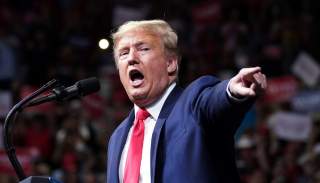 Since the end of his Senate impeachment trial, President Donald Trump has carried out a concerted campaign against his Democratic political opponents as well as members of his administration who cooperated with them.

A White House statement released immediately after the president’s acquittal seemed to foretell this campaign when it ominously asked, “Will there be no retribution?”

Reporters, commentators and Democratic politicians have all been using the language of retribution to describe Trump’s post-impeachment actions.

On Feb. 8 Adam Schiff, one of the House of Representatives’ impeachment managers, said, “President Trump is exacting his retribution, removing those who complied with subpoenas, came forward and testified about his misconduct.”

I am a scholar who studies the meaning of retribution and its role in punishment, and such descriptions do not seem quite right to me. President Trump’s actions are vengeful, to be sure, but they are not truly retributive.

Many contemporary philosophers distinguish retribution from revenge and argue that retribution is the only legitimate basis of punishment.

To take one example, political philosopher Robert Nozick explains the essential features of retribution and the way it differs from revenge in his 1983 book “Philosophical Explanations.”

In his view, retribution is a response to a “wrong,” while revenge “may be done for an injury or harm or slight and need not be for a wrong.”

The wrong to which Nozick refers, like the murder of an innocent person, always involves an unjust or immoral action.

Nozick additionally notes that while retribution “sets an internal limit to the amount of punishment, according to the seriousness of the wrong … revenge internally need set no limit to what is inflicted.”

Others, such as the legal theorist H.L.A Hart, concur that retributive punishment must be proportional to the wrong committed. In their view, retribution is inextricably bound up with the desire to do justice.

Retribution also must be done impersonally and rationally with a guiding concern to give offenders what they deserve.

Revenge, in contrast, is personal, passionate and often excessive. Because of these qualities, vengeance, as Nozick puts it, “involves a particular tone, pleasure, in the suffering of another…” Likewise, political theorist Judith Shklar contends that revenge is “uniquely subjective, not measurable, and probably an unquenchable urge of the provoked heart.” She too argues that “it is the very opposite of justice.”

In a study published in 2008, psychologist Kevin Carlsmith and his colleagues tried to explain the excessive quality of revenge. They found that the pleasure in the suffering of another, about which Nozick writes, is ephemeral, leading to recurring efforts to derive satisfaction by ratcheting up the pain inflicted or making others suffer.

The history of retribution theories

Efforts to distinguish retribution from revenge can be traced back to Greek philosophers. Over time retribution became more popular, moving from a position of doubt among the ancients to full embrace by the end of the 18th century.

Socrates treated retribution as “ignoble and irrational: It piles harm upon harm without accomplishing anything good.” Plato thought retribution was too primitive a motive to justify punishment. Aristotle, in contrast, saw a place for it in a just society.

Just before the dawn of the Enlightenment, thinkers also embraced retribution as a form of justice that would civilize and tame the human quest for vengeance.

The English philosopher and statesman Francis Bacon, writing in 1625, argued that “Revenge is a kind of wild justice, which the more man’s nature runs to, the more ought law to weed it out.” Bacon associated retribution with divine justice and extolled its “magnificence.”

Eighteenth-century philosophers Immanuel Kant and G.W.F. Hegel are well known for their embrace of retributive punishment and their critiques of vengeance.

“Only the Law of retribution,” Kant wrote, “can determine exactly the kind and degree of punishment; it must be well understood, however, that this determination must be made in the chambers of a court of justice and not in your private judgment.”

Trump is striking out at his perceived enemies because of their disloyalty to him, not because they did anything unjust or immoral.

Many condemn Trump’s kind of politics and bemoan the damage it does. But calling his actions retributive is not accurate. From my perspective, they are simply vengeful and should be described as such.