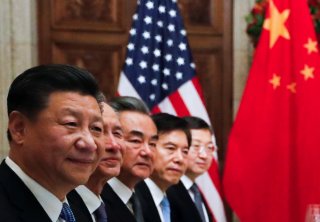 Entering this current public health crisis, China was already in trouble: Its economy was on a path to long term stagnation. Contrary to conventional wisdom, its response to the 2008 financial crisis put it in deeper economic trouble as it accumulated more debt on a massive scale. Xi Jinping ended all hope of economic reform, as he deeply centralized control over the Communist Party of China (CCP). Meanwhile, Xi articulated the most ambitious Chinese goals for global leadership in the CCP’s history. But large ambitions without the means to pay for them cannot be realized. Xi was setting himself up for failure, and many Chinese elites began to grumble about his arrogance and incompetence.

The corona crisis revealed even deeper weaknesses in the Chinese political system. We do not know the whole story of China’s response, but we know enough. Xi, fearing political fracturing and splits, centralized control to the extent that he no longer could get critical information necessary to govern effectively. It is very likely that provincial and municipal leaders in Wuhan and Hubei did not want to incur Xi’s wrath and minimized the extent of the public health crisis. Doctors and writers who did begin to ring alarm bells were arrested and otherwise silenced.

This authoritarian system, seen in the West as an efficient and exportable “Beijing Model of government,” failed. It failed to protect its citizens (until extreme, highly militarized measures were taken), and it failed to demonstrate a modicum of responsibility to the world with which it is highly enmeshed and from which it derives untold benefits.

Instead, the CCP under Xi acted in very predictable ways for an ever-centralizing autocracy. Xi blamed local officials, ramped up censorship, and disappeared more truth–tellers. Meanwhile the virus was spreading worldwide. World leaders lost critical months when China knew the extent of the problem but refused to share its knowledge with global public health authorities and refused US offers of help.

The CCP knows it is in deeper water with its own people, so it is deflecting global criticism and spreading conspiracy theories about how the US started the virus. Like the proverbial arsonists who started the fire, it is offering modest help to those affected.

Meanwhile, some Western elites are falling into Beijing’s propaganda trap. We are told that after all this China will lead a “new world order.” That is quite a claim, not supported by any known facts or patterns of CCP behavior.

But we do know this: China under the CCP can hardly govern itself, let alone a new world order. Its economy will suffer even more as a result of this crisis. And the Chinese people affected by this incompetence and repression know exactly how troubling the CCP is.

The CCP will likely enact new fiscal stimulus polices which will make their debt situation worse and lower their productivity. The real costs of dealing with the health crisis in China are likely orders of magnitude higher than what is reported. The kicking out of Western reporters during the crisis is a sign of a further coverup — a response of weakness and fear. This is all to say that the CCP will not be taking on the reigns of global leadership. What we now know is that the CCP will be the leading exporter of “global public bads” not “public goods.” Its internal problems cannot be contained within the borders of China.

I am not a public health expert. For a layperson, it does seem that the US made a series of mistakes dating back decades. For example, how did we let critical parts of our health care supply chain migrate to China? There should be a reckoning, a “lessons learned” on failed China policy that reaches back decades. The US needs to learn from its mistakes — as it changes course.

And yes, the US has also been slow to test for the virus, and, like almost every country (Taiwan, Singapore and some others excluded), politicians were slow to recognize the extent of the pandemic.

But the US is so wealthy, so charitable, and so socially dynamic compared to China that is likely to come out stronger and more resilient, and share its largesse with less capable countries?  Unlike China, the US can, through the right policies, take care of its most needy during this crisis. It will not arrest and censor critics — indeed, the US government includes critics on its public health task forces.

This crisis reveals the kind of problems China will pose for us in the coming years: that of a more powerful country with great but unmet ambitions. It is no peer of the US. It will export its problems unless we figure out ways to contain these threats. It will pose security problems as it needs to distract from its internal incompetence. But it will not lead a new global order.

This article by Dan Blumenthal first appeared at the American Enterprise Institute.