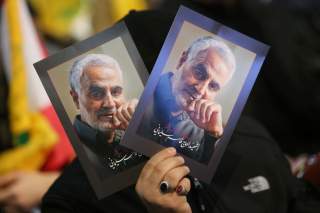 Key point: To believe that Iranian anger over Soleimani’s death and their hopes for revenge were sated by the destruction of several U.S. drones and sheds would be a major miscalculation; their long-term response will be deadly, destabilizing and well within the gray zone of conflict.

When news first emerged of the U.S. drone strike, which killed Iranian General Qasim Soleimani, many were taken aback. As a U.S. military veteran and student of world affairs, drone strikes are nothing new to me, but this strike represented more than those we’re so used to hearing about: decisionmakers in the United States had charged out of the “gray zone” of conflict with a targeted strike to kill an Iranian state official on third party soil. The decision to do so has long-term implications, some of which we’ve already seen. Only one week after the strike, outraged Iraqi politicians voted to expel American troops from the country. Iranian missiles rained down around two Iraqi bases that host American troops. Worst of all, the Iranian people rallied together in support of their fallen hero and in support of the Iranian regime’s promised response – a unity of support that the regime hasn't enjoyed for many years. Individually these consequences are concerning for long-term U.S. interests in the region. Together, they have catastrophic potential.

These issues were on the minds of many in the room when Defense Secretary Mark Esper spokeat the Johns Hopkins University’s School of Advanced International Studies on February 7th in Washington DC. I had the opportunity to ask Secretary Esper regarding what the “long-term, strategic benefit” of the Suleimani strike was. His answer was familiar:

“Well, the long-term, strategic benefit is we took off the playing field, off the battlefield – and he was on the battlefield as a battlefield commander, one of their most effective commanders - somebody who is a terrorist leader…a U.S. designated foreign terrorist organization, who had the blood of hundreds of Americans on his hands over many, many years. By the way, he had the blood of hundreds of other people around the world on his hands, too, including the Iranian people. And so it was an easy decision for me to make that, as it was for the Chairman of the Joint Chiefs of Staff. Again, he had the blood of Americans on his hands as recently as, I think, the attack of December 27th that the IRGC was behind, and he was actively planning the next attack. And so I think taking him off the field – a battlefield leader off the battlefield – was a good response to Iranian bad behavior and his personal actions over many, many years.”  U.S. Secretary of Defense Mark Esper

Secretary Esper and others in the administration have issued similar versions of this answer before, but it remains insufficient; the Secretary offers only short-term, tactical benefits as justification for an action with broad strategic implications. Removal of a battlefield commander is the very definition of a tactical action, not a strategic one. Without the proper planning, forces and assets in place to capitalize on the ensuing confusion and chaos, the elimination of an enemy commander yields only temporary disruption to their fighting capability. Further, it seems difficult to believe that the “next attack” (whatever it’s alleged to have been) was thwarted by Soleimani’s death. The General’s second-in-command, Brig. Gen. Ismail Qaani, was appointed the new commander of the IRGC’s Qods Force only hours after Soleimani’s death. As Soleimani’s longtime number two, here’s every reason to believe that Qaani remains fully aware of these “plans” and intends to make good on them one day. This lends itself to a broader point, which undermines Esper’s reasoning: within those organizations which wish the U.S. harm or imperil its interests, the “next attack” is always being planned, regardless of who’s in charge.

The important difference between strategy and tactics (and that which the Secretary ignored in his answer) is this: strategies span forces, years and decades. Tactics are the means and actions which an organization takes in pursuit of strategy. And, as Sun Tzu wrote, “tactics without strategy is the noise before defeat.” Just as importantly, no tactic – whatever the potential rewards – should be executed at the expense of the long-term strategy. It appears possible, perhaps even likely, that Soleimani’s death did just that.

Iran has spent years attempting to bridge its generational divide using propaganda to cultivate a new, Iran-centric nationalism. One of the most successful of these efforts proved to be the story – and legend – of Soleimani, a frontline leader revered as the brave protector of Iran and the force which kept threats like ISIS at bay. Soleimani was a rare unifier, joining reformists and hard-liners of all stripes in admiration for his courage in the face of U.S., Israeli, Saudi and ISIS threats. Many Arabs admired him as well (the same Soleimani propaganda pieces which aired in Iran were often re-dubbed in Arabic and broadcast for Iraqis to see and hear), seeing him as a fellow-Shiite protector against the same extremist elements which overtook Iraq in the rise and fall of ISIS.

After his death, Soleimani unified Iranian society once more – this time in grief and anger – as people from all parts of the political and religious spectrum joined in grieving his death. More importantly, Iranians fell in step behind the government, which vowed retribution in the name of their fallen hero. Iranian society was, however briefly, galvanized by Soleimani’s death. In dispatching Soleimani, U.S. policymakers, including Secretary Esper, gave the Iranian regime what they’ve spent years trying hardest to obtain: national unity.

Bolstered by the public response, the Iranian regime struck back days later with a missile attack on two U.S. military assets in Iraq. That IRGC incompetence and a lack of training squandered the national goodwill (the Iranian public was infuriated to learn that a loaded passenger jet was inadvertently downed by IRGC missiles in the hours immediately following the ballistic response) is irrelevant: Iranian leaders saw the unity and support they briefly gained, the U.S. can be certain that they’ll tap the public anger over the Soleimani strike as a means of reclaiming it. The name “Soleimani” will be carried forward for decades to come as a rallying cry by the regime to solidify national unity against the United States, Saudi Arabia and Israel, and to gain domestic support for the regime’s malign foreign antics.

What’s more, the Iranian ballistic missile attack against U.S. hardware in Iraq was a pea-shooting response to the fiery obliteration of their most vaunted national figure. To believe that Iranian anger over Soleimani’s death and their hopes for revenge were sated by the destruction of several U.S. drones and sheds would be a major miscalculation; their long-term response will be deadly, destabilizing and well within the gray zone of conflict. For this reason, it seems clear that the tactical decision to kill Soleimani – however, despicable his crimes – undercuts U.S. strategy in the region, along with any hope of a more (as opposed to less) stable future for the Middle East. Increased Iranian unity for anti-American adventures means greater, continued risk to U.S. personnel in the region.

Secretary Esper often reminds audiences that Soleimani was a legitimate military target, a fact that is almost indisputable in the context of the Global War on Terror. Not every “legitimate” target is the best or most intelligent one to strike, however. I believe Secretary Esper when he says that the decision was “easy;” most decisions are made easier by making them in a vacuum. But such decisions are more difficult when made amidst their broader strategic contexts. This decision may have been easy, but it wasn’t supposed to be.

Brandon C. Patrick is a doctoral candidate at Johns Hopkins SAIS, where his research focuses on Iranian military innovation. After serving as a linguist in the U.S. Air Force, he earned degrees in Arabic and Middle Eastern / North African studies from the University of Arizona. He lives with his wife in Virginia.

His article first appeared at RealClearDefense.