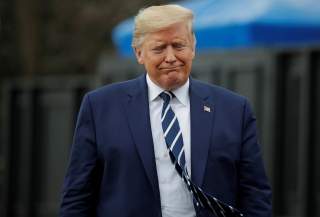 The International Atomic Energy Agency (IAEA) has reported that the Iranian government has both increased its uranium stockpile and denied inspectors access to key nuclear sites. Together, the IAEA findings will raise suspicion about Tehran’s intentions and may also signal a decrease in the break-out time, that is, the time in which it would take Iran to enrich and divert enough nuclear fuel to propose a nuclear weapon.

Partisan polarization amidst the head of an election season may lead some analysts and diplomats to blame the United States from walking away from the 2015 Joint Comprehensive Plan of Action (JCPOA), the so-called nuclear deal. They should not.

Put aside the fact that the JCPOA was no more a treaty than was President George W. Bush’s hard-negotiated agreement to build anti-ballistic missile radar systems in Poland and the Czech Republic from which President Obama walked away. Both were, in the view of the State Department, “political commitments” without the force of law. In a November 2015 letter to then Rep. Mike Pompeo, Julia Frifield, assistant secretary of State for legislative affairs under Secretary of State John Kerry, wrote that the JCPOA was neither “a treaty [n]or an executive agreement, and is not a signed document” and instead only “reflects political commitments.”

Trump’s withdrawal from the JCPOA may have been poorly-handled—he would have been better off demanding the inspections of military sites with which Tehran had refused to comply under Obama—but it is not the JCPOA alone which governs Iran’s nuclear program. Rather, under the Nuclear Non-Proliferation Treaty, Iran has obligations to be both transparent and to foreswear military dimensions of its nuclear program. It was Iran’s persistent violations of its Nuclear Non-Proliferation Treaty Safeguards Agreement which led the IAEA initially to refer Iran to the UN Security Council in 2005.

Both Trump’s detractors and proponents of rejoining the JCPOA—including many of the contenders for the Democratic Party’s nomination for the U.S. presidency—are doing no favors by simply demanding the United States return to the JCPOA’s fold. The JCPOA reversed IAEA precedent because, unlike South Africa’s 1991 denuclearization, it came with sunset clauses which do not pause while the U.S. remains outside the JCPOA. If Joe Biden or Bernie Sanders enter the White House in January 2021 and recommit to the JCPOA, they will simply be joining an agreement whose controls are expiring.

The broader problem with any agreement like the JCPOA that pumps money into the Iranian economy is the disproportionate role which the Islamic Revolutionary Guard Corps plays in it. Greater cash will not go to the Iranian public or even regime reformists; it will go directly into the coffers of the most hardline factions within the country. Couple that with the fact that it is the Revolutionary Guards which was most involved in the Possible Military Dimensions of the nuclear program and that they refused any outside inspections of the bases where such work might have occurred, and the glaring weakness of the JCPOA becomes apparent.

U.S. self-flagellation and external America-bashing may blame Washington for the current Iran crisis, but this too misses the point. Iranian leaders have agency. They chose initially to cheat on their nuclear commitments prior to the 2005 referral. Even the so-called reformers bragged about deceiving the West. As with North Korea, to receive reward for defiance simply incentivizes greater defiance. In addition, the willingness of American and European progressives to blame everyone but Iran encourages greater opacity in Tehran.

This tendency has been true on the nuclear issue, but also was recently apparent with regard to the Iranian response to the coronavirus. Iranian leaders cynically blamed sanctions, for example, never mind that humanitarian channels exist. But even if banks were still reluctant to be involved in any Iran trade, nothing excuses the Iranian decision to hold public rallies and keep shrines open while epidemic spreads. Too often, the willingness to blame everyone but Tehran’s leaders exacerbate problems rather than prevent them.

Back to the most recent IAEA findings: Hatred or love for Trump should be irrelevant in the reaction to the latest Iranian nuclear challenge. Frankly, if the Obama administration negotiated the JCPOA as a treaty rather than try to make an end-run around the checks-and-balances put in place by the Founding Fathers, much of the subsequent U.S. political dispute might have been avoided. Regardless, diplomatically, the world should rally around one immediate demand: Iran must ratify the Additional Protocol to the Nuclear Non-Proliferation Treaty. This was a supplement to the original Nuclear Non-Proliferation Treaty to plug loopholes recognized after the 1991 Iraq war exposed the fact that Saddam Hussein had a robust nuclear program despite multiple clean bills-of-health from the IAEA. In short, the Additional Protocol offers greater nuclear technology sharing upon signing (which Iran did) in exchange for greater inspections upon ratification. Iran is one of a handful of states which refuse to bring the Additional Protocol inspections into force. Rather than demand Iran ratify the Additional Protocol, Obama and Kerry accepted a loose Iranian promise to act in accordance with it. The best way to ensure that, however, is not to accept Iranian Foreign Minister Mohammad Javad Zarif’s whispered sweet-nothings, but rather to ratify and have the commitment become permanent.

And while it is correct for the United States, Europe, and others to reach out to the Iranian people to provide humanitarian relief, it is essential for long-term peace and counter-proliferation that the Iranian leadership’s embrace of the Pyongyang playbook be met greater international ostracism of both the regime and its top leaders.