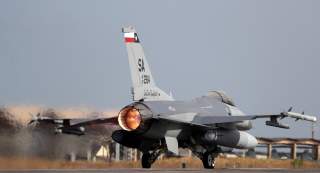 Key Point: Fourth-generation fighters will still have a place in a fifth-generation world—for some countries, at least.

MFDs allow for easier integration of new weapons. Before, new weapons might require dedicated control boxes to be added to various portions of the cockpit to allow the pilot to control them. MFDs simplify this and make it more of a programming matter, as they have multiple screens that can display targeting data or even images from a seeker of a missile.