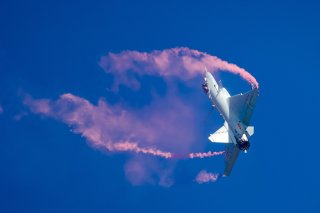 On Sunday, just three weeks into 2022, Beijing launched its largest sortie of military aircraft toward Taiwan since last October. The formation of thirty-nine People's Liberation Army Air Force (PLAAF) warplanes included twenty-four J-16s, ten J-10 fighter jets, and a mix of other support and electronic warfare aircraft. At least one nuclear-capable H-6 bomber was also reported to be among the aircraft that took part in Sunday's sortie.

According to Taiwan's Defense Ministry, the PLAAF planes entered the island nation's air defense identification zone (ADIZ). The Chinese incursion came just one day after the U.S. Navy and the Japanese Maritime Self Defense Force put on a show of force in the Philippine Sea that included a flotilla of two U.S. aircraft carriers, two U.S. amphibious assault ships, and a Japanese helicopter destroyer.

"Freedom at its finest! Nothing reaffirms our commitment to a #FreeandOpenIndoPacific like 2 Carrier Strike Groups, 2 Amphibious Ready Groups sailing alongside our close friends from the Japan Maritime Self Defense Force," tweeted Vice Adm. Karl Thomas, commander of the U.S. 7th Fleet, while sharing images of the flotilla as well as U.S. and Japanese aircraft. The U.S. Navy did not report how close the flotilla was to Taiwan.

Business as Usual for Beijing

China has increased its aircraft sorties near Taiwan, and the final quarter of 2021 saw a massive spike in the number of incursions into Taiwan’s ADIZ. On October 4, a record-setting fifty-six Chinese PLAAF warplanes entered the zone.

October 2021 also remains the busiest month on record in terms of Chinese incursions. China made 196 incursions in October, 149 of which were made over the course of four days following the People's Republic of China's "National Day" celebrations. A total of 969 incursions were made by Chinese warplanes in 2021. The nearly 1,000 PLAAF incursions made in 2021 almost tripled the number of incursions made in 2020, the first year that Taipei regularly reported data on air incursions.

However, it is important to note that Taiwan's ADIZ is not the same as the island's territorial airspace. It is a far larger area that actually overlaps with part of the mainland's own ADIZ.

Taiwan and mainland China have been governed separately since the Nationalist Forces were defeated by the Communists at the end of the Chinese Civil War.