Dreams Become Reality: Here’s What Super Tomcat 21 Would Have Looked Like 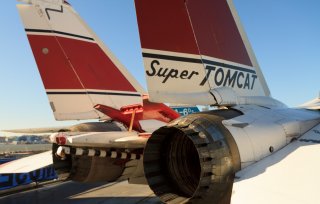 Arguably one of the most beloved jet fighters in history, the Grumman F-14 Tomcat was an American supersonic, twin-engine, two-seat, twin-tail, variable-sweep wing fighter aircraft that was without equal.

The plane was armed with a General Electric Vulcan M61A-1 20mm gun with nearly seven hundred rounds of ammunition and possessed eight hardpoints for carrying ordnance—four on the fuselage and two on each side under the wings. It also could carry short, medium, and long-range air-to-air missiles AIM-9, AIM-7 and AIM-54, and air-to-ground ordnance that included CBU cluster bombs.

However, as great as it was due to its incredible fighter capabilities, the U.S. military never got to see the aircraft’s next iteration.

“If the Super Hornet hadn’t been built, Grumman’s next-gen Tomcat may have become a reality,” writes Tyler Rogoway at the War Zone.

In an effort to get a better idea of what the F-14 Super Tomcat 21 might have looked like, Rogoway looked to aerospace artist Adam Burch from Hangar B Productions to forensically recreate this aircraft that never came to be.

“The Super Tomcat 21 would include a variety of enhancements over the F-14D and it could be produced via remanufacturing existing F-14 airframes or it could be ordered via a new-build arrangement. Most likely a combination of both options would have been used, just like the F-14D,” he writes.

“Remember that the last new-build Tomcat had rolled off the Bethpage, New York production line in 1992, so it’s not like the F-14 inventory was long in the tooth or its production line had gone cold for an extensive period of time when the Super Tomcat 21 was being considered. The ST21 would have incorporated a bunch of highly logical features that would accentuate the Tomcat's attributes and mitigate its deficiencies. These were largely already available or relatively mature technologies. As a result, Grumman could start delivering ST21s as soon as the mid-1990s,” he continues.

Some of the proposed modifications included F110-GE-429 turbofan engines, single-piece windscreen for enhanced visibility, wide-angle raster-scan HUD capable of projecting FLIR imagery, AN/APG-71 radar with additional upgrades ported over from the AN/APG-70 used on the F-15E, integration of latest standoff weaponry, as well as AIM-120 AMRAAM, and an upgraded AN/ALE-47 countermeasures dispenser.

One of a Kind

“A host of other less prominent features would also be included. … In all, the ST21 would have been a mighty beast of a multi-role fighter. With drastically expanded fuel capacity, both internally and externally, its range and loiter time would have been increased quite dramatically. Combined with supercruise in an air-to-air combat configuration, AIM-120 capability, and its modern Infrared Search and Track (IRST) system and updated Television Camera Set (TCS) ported over from the F-14D, the ST21 would have pushed the Tomcat into a new realm of air superiority fighter and fleet defender,” Rogoway contends.

“In fact, no other fighter in the world would have possessed similar long-range target detection and identification capabilities,” he concludes.