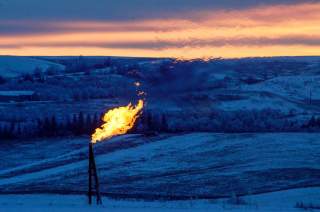 Oil production on federal lands topped 1 billion barrels in 2019, marking a 29% increase from the Obama administration, Department of the Interior officials announced Tuesday.

Technological advancements over the last decade in hydraulic fracturing helped drive the increase, as did President Donald Trump’s rollback of his Democratic predecessor’s environmental regulations. Production was up 122 million barrels from 2018, The Associated Press reported.

“You have to create an environment where folks want to bid on leases and then go develop them,” acting Assistant Secretary of the Interior Casey Hammond told the AP. “One thing we can do as regulators is give people some assurances we’re going to work through the process in a fair and efficient way.”

The fracking boom, which began around 2009, collapsed the price of natural gas, giving public utilities a low-cost alternative fuel as regulations imposed by former President Barack Obama forced coal plants to install expensive equipment or retire. Fracking and the accompanying rules have provided a one-two punch to coal producers, while lifting the fortunes of gas and oil producers.

Such technological advancements were not the only element involved in the production increase.

“This is another example of the Trump administration undoing four or five decades of thoughtful laws to protect the public lands,” Mike Penfold, a retired state director at the Bureau of Land Management, told the AP. Trump is setting up an environment in which “oligarchs” are benefiting more than taxpayers, Penfold suggested.

The increase does give the U.S. a significant geopolitical advantage over the Organization of the Petroleum Exporting Countries, according to one analyst.

The sheer amount of production coming from federal lands gives the U.S. a big enough stake in the international oil market to prevent OPEC from lording its crude over the world, Sarp Ozkan, director of energy analysis at the industry data firm Enverus, told the AP.

Content created by The Daily Caller News Foundation is available without charge to any eligible news publisher that can provide a large audience. For licensing opportunities of this original content, email [email protected]