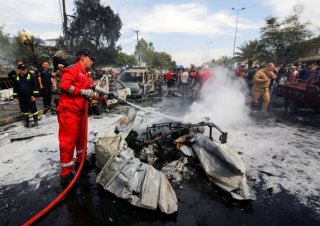 Five rockets targeted an Iraqi military air base near Baghdad on April 18, injuring three Iraqi soldiers and two foreign contractors. According to Iraqi security officials, at least two Katyusha rockets exploded in the section of the base that houses U.S. contractors. Four days prior to this attack, a drone carrying explosives hit Iraq’s Erbil airport, also targeting U.S. forces. Although both attacks remain unclaimed, Iranian-backed militias have taken responsibility for similar incidents recently. The series of attacks in Iraq this week highlight escalating tensions between pro-Iran militias, the United States, and Iraqi security forces in the country.

In the days leading up to both attacks, U.S. officials joined their Iraqi counterparts in a fourth round of “strategic dialogue” discussions. The United States committed to withdrawing all remaining combat troops from Iraq without presenting a specific date. Iranian-backed militias vehemently oppose the presence of American troops in Iraq and have threatened in the past to increase the scope of violent attacks if the United States ignores a pull-out deadline.

The United States has experienced the troop withdrawal debate before. In 2011, eight years into the U.S.-led invasion of Iraq, then-President Barack Obama oversaw the drawback of the remaining 150,000 U.S. troops on the ground. Three years later, the United States would return at the request of the Iraqi government to aid in the fight against the Islamic State of Iraq and Syria (ISIS).

As ISIS began to capture more territory in 2015, other groups and coalitions rose to counter its rise, including the Popular Mobilization Forces (PMF). This state-sanctioned mainly Shiite coalition of militias initially consolidated to join the United States and Iraq’s security forces to counter the Islamic State. After ISIS was largely defeated, various PMF umbrella groups splintered from Iraq’s security forces and evolved into Iranian proxies. Although these militias are legally part of the country’s security forces, they actively work in the interests of Tehran and consistently defy Iraqi law.

Iran and its proxies remain Iraq’s largest roadblock to sovereignty today. Since the premiership of Iraqi prime minister Mustafa al-Kadhimi began in May 2019, the United States has worked to improve ties with Baghdad. In response, Iran has meddled in U.S.-Iraq talks and intensified its rocket assaults targeting American assets, contributing to the country’s instability and cooperative rifts with foreign nations.

Tensions between the United States and Iran have played out on Iraqi territory in recent years. Since the U.S.-ordered targeted killing of top Iranian General Qassem Soleimani in January 2020, Iran’s militias have consistently targeted American military and diplomat sites in Baghdad’s Green Zone. The April 13 Erbil airport attack is significant because it indicates Iran is expanding the arsenal it is willing to deploy against U.S. assets in the country.

Two days prior to the Erbil attack, a deliberately planned explosion struck Iran’s underground Natanz nuclear facility, damaging its centrifuges. Although Israel has not claimed responsibility or denied carrying out the attack, the United States and other Western officials believe Israel is the perpetrator. Iran was likely demonstrating that they have the capability and willingness to retaliate against Israeli airstrikes and the continued presence of U.S. troops in Iraq.

Prime Minister Kadhimi is facing an election in fall 2021, and Iran’s seeping influence will not bode well for his incumbency. As the upcoming U.S.-Iran nuclear discussions approach, an uptick in attacks targeting American assets in Iraq will continue to grow. A fifth-round of “strategic dialogue” discussions may be looming as Iraq remains the battleground for this U.S.-Iran strife.