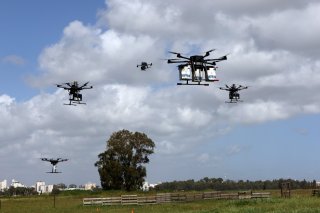 In December 2013, then-Amazon CEO Jeff Bezos went on 60 Minutes to introduce something that was considered a pie-in-the-sky idea: deliveries by drone.

The shipping giant would later dub the project Amazon Air, but progress has been slow-going as rivals like Walmart have moved ahead with the technology. Walmart announced an expansion of its drone delivery program earlier this spring.

And now, Amazon is finally moving forward with drone deliveries in the United States.

The first such program will launch in Lockeford, California, the company announced in a blog post. A timeline wasn’t announced, but the launch will follow FAA approval, once it comes.

"Lockeford residents will soon have access to one of the world's leading delivery innovations,” said California state assemblyman Heath Flora, whose district includes Lockeford. "It's exciting that Amazon will be listening to the feedback of the San Joaquin County community to inform the future development of this technology,” Flora continued

Amazon plans to learn from what Lockeford residents have to say.

“Lockeford residents will play an important role in defining the future,” the company said in the post. “Their feedback about Prime Air, with drones delivering packages in their backyards, will help us create a service that will safely scale to meet the needs of customers everywhere—while adding another innovation milestone to the town’s aviation history.”

Amazon also talked in the post about how their drone delivery program will differ from others.

“We’re building something different. We’ve created a sophisticated and industry-leading sense-and-avoid system that will enable operations without visual observers and allow our drone to operate at greater distances while safely and reliably avoiding other aircraft, people, pets, and obstacles,” the company said.

“We designed our sense-and-avoid system for two main scenarios: to be safe when in transit, and to be safe when approaching the ground. When flying to the delivery location, the drones need to be able to identify static and moving obstacles. Our algorithms use a diverse suite of technologies for object detection.”

The Verge noted that the program has been somewhat troubled so far. These include “a handful of crashes, reports of alleged safety lapses, and high turnover.”

“Drone deliveries were supposed to revolutionize the movement of goods around cities, with companies like Amazon, Wing, and Uber promising to set up large-scale operations in the near future,” The Verge said. “Instead, the technology has mainly focused on small-scale experiments, delivering vaccines and blood to remote locations. In the US, drone delivery has generally been limited to smaller towns, where land usage is less crowded and complex.”