Drone Swarms are Changing How the U.S. Army Thinks and Fights 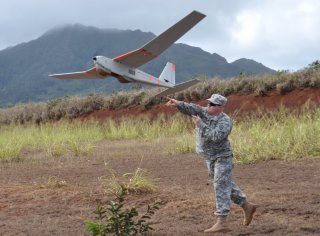 Are mechanized forces and units of maneuvering soldiers vulnerable to large swarms of mini-drone explosives or surveillance operations suddenly appearing in the air? The U.S. Army is taking measurable and impactful steps to minimize and counter the risk.

Small drone swarms can hit speeds of sixty to seventy miles per hour, and some are small enough to fit in the palm of your hand. Drone swarms can be dispatched to blanket an area with intelligence, surveillance, and reconnaissance (ISR) capabilities; build-in redundancy so a mission can continue if one is destroyed; or even become explosives themselves programmed to detonate upon impact.

These swarms are a unique and pressing threat capable of presenting a new array of challenges for advancing ground infantry or armored units. They can also threaten Forward Operating Bases and other high-value targets. Newer applications of advanced autonomy can also enable greater flightpath and mission coordination among drones themselves.

These are key reasons why the Army and its industry partners are now testing, refining, and upgrading a key number of counter-drone technologies and tactical approaches. Groups of drones, should they be effectively sensed and “found” quickly, can be jammed, disabled, or destroyed prior to arrival with artificial intelligence-enabled sensor processing; kinetic effectors such as interceptor missiles and munitions; or non-kinetic and less damaging alternatives such as high-powered microwave, electronic-warfare capabilities, or lasers.

One interesting innovation now being improved is the use of what’s called a “proximity” fuse for ammunition fired out of a cannon, such as a 30mm lightweight chain gun, mounted on an armored vehicle. Proximity rounds operate with a built-in sensor able to detonate when in close range of an approaching drone swarm. The fragmentation occurs over a dispersed “area” such that it can destroy a group of targets in close proximity to one another in the air. Cannons can also fire air-burst rounds which are pre-programmed to explode at a specific, predetermined point in the air based on a number of measured “rotations.” While both are extremely effective, Army expert weapons developers say proximity rounds are optimal against drone swarms.

“There are pros and cons to proximity, there are pros and cons to airburst, a lot of it depends on what target you’re going after. Right? So, applications specifically against an unmanned aircraft, you can use both. This is really good for proximity though, because the target might be smaller and faster-moving than an armored vehicle or a soldier on the ground,” Maj. Gen. Ross Coffman, director of the Next Generation Combat Vehicles Cross-Functional Team at Army Futures Command, told the National Interest in an interview.